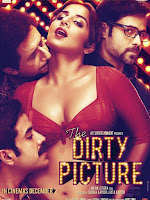 Plot
Reshma (Vidya Balan) is a small town girl who wants to make it big in films. She runs away from her house to Chennai a day before her wedding. She tries to get a supporting role in a movie but is insulted for her looks and is rejected. She somehow manages to get the role of an erotic dancer at a later stage. Her act goes viral and she is christened ‘Silk’ by producer SelvaGanesh (Rajesh Sharma). She continues to act in sleazy film and achieves fame envied by her counterparts. The rest of the story is about how she handles the criticism and responds to it.

Naseeruddin Shah is excellent in the role of the elderly actor who sleeps around with all his female co-stars. I cant imagine anyone else doing a better job. Its one of the best roles Tusshar Kapoor could have got, and he doesn’t disappoint. He looked idiotic in his costumes, but he does justice to the role. Emraan Hashmi has limited presence in the film, and portrays a character very different from his usual genre. He was very good as well. Rajesh Sharma (SelvaGanesh) was excellent as the director. Rest of the cast was alright.
Story-Screenplay-Direction
It is very difficult to make a film based on the life of an actress who committed suicide (Silk Smitha). But writer Rajat Aroraa (story, dialogues and screenplay) comes up with a very good script without going too deep into details on Silk’s personal life. The plot of the film is something similar to that of Kalki Koechlin role in Dev.D – people want and watch girls in skimpy clothes doing sleazy dances on-screen, but then insult the same girls and label them as sex-sirens off screen. The story revolves around how Silk handles this situation, and how she gives in into it towards the end. Though well written, the story tends to lose steam towards the second half of the movie. Dialogues are brilliantly written and act as the second lead in the movie. Screenplay could have been more effective towards the climax. Direction by Milan Luthria is good. He’s certainly improved on his directorial skills since Taxi 9211.

Other Departments
Music by Vishal-Shekhar is alright. Audiance were going nuts for “Ooh La La”. Background score is good. The south-Indian track “Naka Muka” is very effective as the BG. Cinematography by is pretty good and editing by Akiv Ali is decent. Production values by Balaji Telefilms are very good. They did a very good job recreating the 80’s

Analysis
As already mentioned, it’s a Vidya Balan’s film. If it weren’t for her, this film would have been crap. She has portrayed the best role of her career so far. Brilliant dialogues, superb acting by Vidya and Naseeruddin Shah, effective background score, and the oomph factor are the plus points of the film. On the flip side, since its based of a true story, it might/will bore you. It’s not a great film by any means, and even I found it boring at times, but Vidya made sure that I walked out of the theater satisfied.