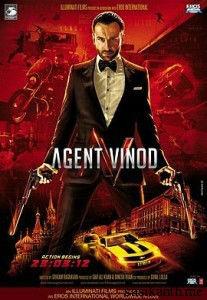 Agent Vinod is one of the weirdest films I’ve seen in recent times. Don’t get me wrong, it’s not a bad film in entirety, but the taking, screenplay and cinematography were so bloody confusing that I began to wonder if The Matrix was simpler to understand.

Director Sriram Raghavan seemed to have been inspired from Casino Royale so much for he decided to make this film on pretty much like it. The plot is no where close, but to me, it seemed like a lot of shots were rip off’s from the James Bond film. Saif Ali Khan tried really hard and put a lot of time and effort to become the Indian Bond. He even put his decision on marrying Kareena on hold until the film was out. Alas, though he comes up with a pretty good performance, the boring, boring script fails him. Except for him, the millions of actors playing different characters in the film do nothing but confuse you. Of them, Kareena looked the most out of sorts.

The fast paced action in the film is so bloody fast that you can neither make head nor tail out of what’s happening on-screen. The cinematography, thought brilliant in few episodes, could have been way better. The screenplay, especially in the first half, is so confusing, that I couldn’t differentiate between the good and the bad guys.

Agent Vinod is a film you can watch once. Give it a shot if you have nothing else to do this weekend!!

Plot
Vinod (Saif Ali Khan) is an Indian RAW agent trying to get hold of an ISI Colonel who is in turn trying to get hold of a suitcase bomb which could kill millions of people. In the process, he bumps into an undercover Pakistani ISI Agent Iram Parveen Bilal (Kareena Kapoor) who is also trying to get hold of the suitcase. Together, they travel from Moscow to Morocco, Latvia, Somalia, Karachi, and finally to India, only figure out that there is more to the conspiracy than what meets the eye.

Actors Performance
Saif Ali Khan looks suave and fits the bill perfectly. He carries the film on his shoulder with ease. Some of the dialogues mouthed by him are really good. But his characterization, though best of the lot, could have been much better. Kareena Kapoor, as already mentioned, looked pale and dead. He character required her to be sad for most part, but I thought she over did it. She looks gorgeous in “Dil Mera” song though. Ram Kapoor and Zakhir Hussain shine in their respective roles. Ravi Kishan and Prem Chopra are alright.

Story-Screenplay-Direction
Sriram Raghavan is a director with potential. With Agent Vinod, he tried to take his films a notch further with this film, but unfortunately for him, his efforts fall flat. The script is more or less a stitch of the Bourne, MI and Bond series; the problems with the stitch being the gaping loopholes and weak characterizations. The first half pretty much makes no sense, thanks to the mediocre screenplay. The second half helps us connect the dots, but not without rattling our brains. His brilliance though is showcased in the canning of “Raabta” song. The single shot sequence is one of the high points of the film. That apart, the direction is decent.

Other Departments
Music by Pritam is alright. He did a very good job ripping of some International tracks. “Raabta” is my favorite from the movie. Background score by Daniel George is pacy and good. Editing by Pooja Surti could have been crisp. Cinematography by Muraleedharan seemed very experimental. The upside down shot in the first few minutes, and the one shot picturization for “Rabta” song were brilliantly done. Action sequences by Perter Heins were, as usual, totally overboard, and made no sense to the naked eye. A lot of money was spent on the production (shot in 12 countries), and the effort is visible on-screen.