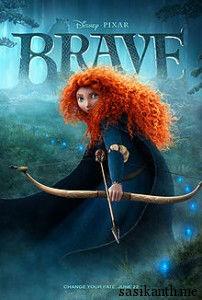 Brave is no Finding Nemo. Neither is it close to Ratatouille, Up, The Incredibles , or any of the other Pixar classics. It’s very different from what Pixar generally make. But still, it’s a beautiful movie; a movie with heart. One you will enjoy!!

Scripted by Brenda Chapman, Brave, the production house’s first fantasy fairy tale, tells the story of a princess, Merida, who defies age-old customs of the kingdom, and in the process gets her family cursed. The rest of the story is about how she fights to undo the curse. Though the concept has the potential to create a classic, the script lacks the punch to make it one. The story is touching, yes, but I believe it could have had little more substance. Titled Brave, I never really saw Merida’s bravery coming into picture. Yes, she did fight for her family, but that was barely for 2 minutes of the movie. I didn’t see much archery either. However, some brilliant direction by Chapman and Mark Andrews makes this film work. It has its moments in abundance, both fun and emotional. The episodes involving cursed Queen Elinor, and the triplets are all hilarious. Screenplay by Chapman, Andrews, Steve Purcell and Irene Mecchi is good, but could have been more effective.

Kelly Macdonald’s voice was perfect for Merida. I loved the Scottish accent, and she was able to do absolute justice to Merida’s character. Emma Thompson did a very good job voicing Queen Elinor. The rest of the voice cast was alright.

On technical front, the movie scores big time! Though the 3D effects were never so great, the animation and visual effects were brilliant. The colors, shades, visuals were all magnificent. Music by Patrick Doyle is good. Editing by Nicholas Smith is crisp. There was not a dull moment in the entire film.

Overall, Brave is just a good film. A better script/fairy tale could have made this another Pixar classic, but that is not to be. The direction is brilliant, and the emotions are perfect. Go watch it without any expectations, and I am sure you won’t be disappointed.

Acting: 8/10
Story-Screenplay-Direction: 8/10
Technical Aspects: 9/10
Is it worth your time and money??: Absolutely. It ain’t like any of the other Pixar films, but is a good movie nevertheless. Go watch it!! (PS: Take your mom along, she’d love it!!)