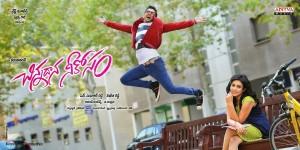 Post his directorial debut (Tholi Prema), Karunakaran has been making some disastrous movies. While Chinnadana Neekosam isn’t a disaster, it is no better than average.

Similar to most films this year, Chinnadana Neekosam deals with family sentiments. Boy falls in love with a girl, but is ready to let go of it for her family’s sake. While Karunakaran showcases the first half in an entertaining way, the second half goes totally haywire. Be it the premise or the storytelling, this half is a total disaster with some terrible screenplay and direction. The entire gay episode was absolutely unnecessary and the climax was clichéd. Sad that a promising start couldn’t be cashed upon.

Nithiin tries his best to carry the movie on his shoulders but succeeds only to an extent. Come a point, his act seemed repetitive and boring. He needs to get out of the box and try something different. Mishty Chakraborty has a meaty role, but didn’t fit the bill. She looked odd in most angles and her acting skills aren’t worth mention either. Nassar is alright while Ali is terrible. The rest of the cast didn’t really make an impact.

Music by Anoop Rubens is alright. Editing by Praveen Pudi is below par. There are so many scenes which could have made the cut (Thagubothu Ramesh scenes, gay episode) but were inserted just for the heck of it. Cinematography by Andrew is decent. Dialogues by Harsha Vardhan were good in parts.

Is it worth your time and money??: Not really. While the first half is decent, the latter half is terrible, and if I might add, disgraceful. Unless you have nothing better to do, you can easily give this one a skip (or better, walk out from the theatre after the first half).

Worth mention: Some dialogues in the first half.

PS: @Nithiin: Gay men are men, just like you and me. I thought you knew better than that.