I’ve been wanting to try this place since it opened recently. I’ve been to both Rajdhani and Golden Star while in Mumbai, and loved the food and service, especially Golden Star. When Ohri’s came up with a similar concept, that too for the most reasonable price of Rs. 189 /- all-inclusive, I needed to hog.

We were cordially invited into the restaurant by the amicable staff. Tilak was marked on my forehead when I entered. The place had decent interiors, was very bright, and quite full for a weekday. We sat at a table where four huge thali’s were laid. 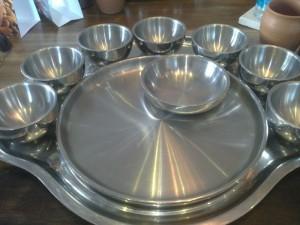 It took a while, and I mean a while for the waiters to attend to our table. And the food too was  all not served at once, but in batches, which made it quite difficult for us to begin with. But a little patience, and our thali’s were full. 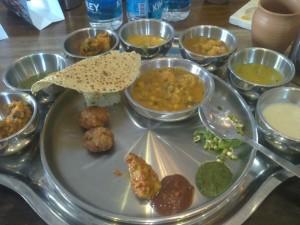 In the menu today, for starters, Dhokla and Dal Baati Churma, and the curries were (in order from left) Gobi Masala, Palak Paneer, Aloo Jeera, Kaddu Dal (listed as Pineapple Dal), Chole, Gujarati Dal and Kadhi. The Dal Baati was good, and Churma excellent. Dhokla was hard and not up to the mark. On the curry front, all of them were yum, with Chole being best of the lot. The Gujju Dal was not so sweet and perfect, and Kadhi was alright. I didn’t taste the Kaddu Dal. 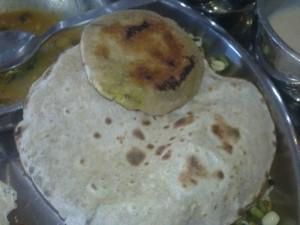 Three types of breads were served: Pulka, Masala Puri and Bhakris. The Pulka’s were a little hard, but not so bad. Masala Puri’s and Bhakris were good.

On the rice front, they had Khichidi, Pulao and Curd Rice. The Khichdi was made of wheat gram, and was mediocre. It had no proper taste to it. The Pulao was excellent though. The rice was perfectly cooked, and it had a nice flavor to it. I didn’t have the Curd Rice, but amma said that it didn’t taste so good.

For desert, there was Gajar Ka Halwa and Double Ka Meetha, both of which were yum. There was also a sweet digestive drink served upfront, which was alright.

Overall, a nice meal. For the price we paid, I should actually say excellent meal. The waiters were very nice and forced us to eat more even though we were full. The only issue was the slow service, for we had to wait for quite a while before the items we asked for were served. Also, the waiters were at times in such hurry that they didn’t bother to hear what we were saying. Other than that, the whole experience was really good.

De Thali is not a place which you can visit very often for the same kind of food might bore you after a while. But it’s definitely a place you can visit when you are really hungry and are in a mood to eat some good food for a reasonable price.