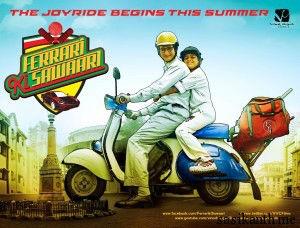 Ferrari Ki Sawaari is a joy ride, yes. But there is so much drama in this joy ride, that you stop enjoying it and wonder when it’ll get over.

Written by the director, Rajesh Mapuskar, and Vidhu Vinod Chopra, Ferrari Ki Sawaari narrates a story which is too good to be true in today’s world. It starts off establishing the characters of a lower middle class Parsi family of a too good dad, Rustum Deboo, his son who aspires to be like Sachin Tendulkar, and his grumpy father who doesn’t like his grandson playing cricket. Once established, there are heart-wrenching moments which make you connect to the families woes until the Ferrari comes in. From then on, the script takes a fantasy route. Sachin’s worker handing over Ferrari’s keys, and the guard letting the Ferrari leave without checking who’s in the car were just plain stupid. What follows are a bunch of brain-less, easy to guess drama sequences which last till the end of the movie. Thankfully, most of the cast do justice to their characters, and that’s what helps the movie survive. Dialogues by Raj Kumar Hiraani are not as good as you expect, but decent enough for the script. The direction good, while the screenplay could have been better.

On the acting front, Boman Irani and Ritvik Sahore are very good in their respective roles. But it’s the main lead, Sharman Joshi, who disappoints. He tried his best to be the perfect father, but it was too much for him to handle. Paresh Rawal is brilliant in his small yet vital role. Deepak Shirke (security guard) was fun to watch. Vidya Balan looked plump. The rest of the cast was pretty good. If only Sharman was replaced!!

On technical front, music by Pritam is mediocre. Background score on the other hand was pretty good. The re-recording was very good (I had goosebumps every time Ferrari engine roared). Cinematography by Sudhir Palsane was decent enough. Editing by Deepa Bhatia could have been more crisp. It’s a low-budget film and the production values by Vidhu Vinod Chopra films are pretty decent.

Overall, a decent film and one might actually enjoy it, but it’s very long and dramatic. It starts off with great intent, but becomes too much of a fantasy towards the end. It’s nowhere close to the recent films from the Vidhu Vinod Chopra films (3 Idiots or the Munna Bhai series), but is a modest effort nevertheless.

Acting: 7/10
Story-Screenplay-Direction: 7/10
Technical Aspects: 7/10
Is it worth your time and money??: Ferrari Ki Sawaari is a movie with its heart at the right place, but it just doesn’t deliver enough. It’s a family movie, for kids and parents will enjoy it, but I don’t think youngsters will like it so much. Unless you want to take along your parents (like I did) or kids, wait for the DVD.

PS: Watching a movie at Cinemax in Inorbit mall is an utter waste of money. The screens are smaller than ones in preview theaters, and the viewing angle isn’t great either. Stay away if possible.