After reading some raving reviews about the Nawabi Dosa you get at this place, here I was on a Saturday afternoon for lunch. It was quite difficult to find the place, for the address mentioned it to be behind Jagannath Temple on Road No. 12, but it was almost a kilometer away from the temple, tucked inside the Almond House Building. The entrance I walked in from seemed like the back door, and was quite shabby. For an open-air restaurant, the ambiance was alright. There were a couple of huts with cane furnished tables with wall mounted fans. I sat at a table for two right in the front, and observed that the other tables and sofas were quite dusty. Me apart, there was just one other table occupied on a Saturday afternoon.

The menu handed out to be was shabby and in a disastrous state, with pages ripped, cellophane tape hanging out in the corners. Having gone through the menu on Zomato, I ordered for the Special Fusion Combo which served a Soup, Crispy Pops, Aloo Tikki, BBQ Sticks and choice of Nawabi Dosa, Noodles or Fried Rice. I asked for Sweet Corn Soup and Nawabi Dosa. 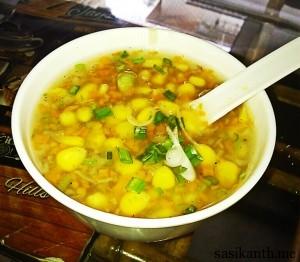 The soup was served in less than 10 minutes. It looked quite colourful and was tasty. It felt nice to have a good Sweet Corn Soup after a long time. 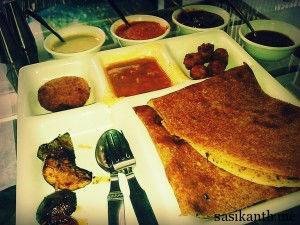 Before I finished my soup, the rest of the meal was served. From first look, I was quite appalled by the quantity served and thought it was too less. There was one Aloo Tikki, five pops, and one piece each of six vegetables (Onion, Tomato, Mushroom, Zucchini, Paneer and Capsicum) on the BBQ stick (though they mentioned plural in the menu), and of course the Dosa. There were no chutneys and sauces served until I asked for them. And neither was water served till I asked for it at the end of the meal.

Taste wise, the Tikki and the Pops were decent, and went well along with the spicy Imli chutney/sauce. The BBQ vegetables were below par. I was hoping for the Dosa to negate the BBQ experience, but I was in for disappointment. The Dosa coated with Kaju and Suji Rawa paste on the inside seemed undercooked and lacked salt. The chutneys and the yum sambar served along helped me gulp it down, but otherwise, it was quite a disaster. It was probably because of my high expectations that I felt more disappointed with it.

Overall, a not so great meal. I told the guy about the lack of salt, and he confirmed the same with the kitchen. Service wise, I would have liked them to be more proactive. Though the place is well made, it needs better maintenance, and on price front, I thought quantity of food served could be improved.

Hoping for a yummy meal, I was actually quite disappointed.