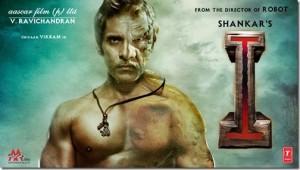 The trailer didn’t look that great, and the initial reviews weren’t positive either. Nevertheless, here I was to watch and appreciate Vikram’s efforts.

Shankar’s I, starts off really well; the story of the body builder wanting to make it large (pun intended) is perfectly picturized. Him lionising a model is also understandable. But the problem starts when the renowned director adds too much commotion to this simple story. After a point, it just seemed like he just wanted to showcase fights, stunts, make up effects and so on, rather than make a good movie. There are a number of episodes which were absolutely irrelevant and unnecessary – love story with the stylist, the Lion-man song and the terribly long fight sequences. These episodes don’t just make the movie incredibly long but test your patience levels. Add to that a mediocre screenplay, and what started off well ends terribly. Why Shankar, why?

Vikram put in his heart and soul into the character and it is sad to see his brilliant performance go waste. Hats off to him for moulding his body as per the characters requirements. Amy Jackson looks fabulously gorgeous. She complimented Vikram in almost every shot and stumped me with her performance. Santhanam is alright. Upen Patel and Suresh Gopi put up decent performances.

Thanks to an Oscar, A R Rahman seemed to have lost it. It’s sad to see him compose such disastrous tunes. But for a couple of songs, the rest go straight into the bin. Even the background score is below par. Editing by Anthony couldn’t get any worse. Cinematography by P C Sreeram is the only saving grace on the technical front. Barring the action sequences, almost every other frame is perfect. Make up effects by Weta Worshop are alright.

Is it worth your time and money??: If it weren’t for Vikram, it’s a big no. His performance, Amy, and cinematography are the saviours in this long film. Shankar’s over-ambitious effort to showcase ‘more’ has ruined an otherwise good film.

Worth mention: Apart from Vikram, Amy Jackson’s performance is noteworthy.