My brother wanted to eat out on a Tuesday afternoon, and so he pulled me out of work to join my family for lunch at Inner Circle. Ice ‘n Spice, located on the first floor of the hotel, is a small restaurant, but brightly lit with abundant natural light. We sat at a table for four in the center of the restaurant. 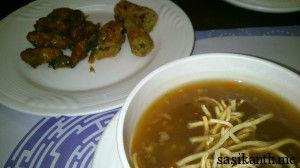 Once we settled down, the soup and starters were served on the table. The Manchow soup had no proper flavor and was just alright. Of the starters, the kababs were a little under cooked, but the Baby-corn Manchuria was excellent. Crispy baby-corn tossed in sweet and sour sauce, yum! I loved them so much , that I kept munching on them till the end of the meal. 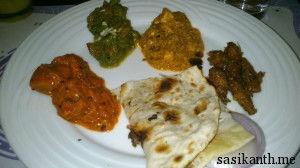 On the Indian front, the Paneer Dhaniya Kali Mirch was very good. I was expecting it to be spicy, but it wasn’t so, and the paneer was soft and fresh. The Hariyali Veg was more of mixed vegetables in spinach gravy. It tasted alright. Achaari Aloo was spicy, tasty and best of the lot. Naan and Roti were served on table, and were pretty decent. 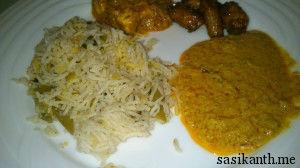 Their Pulao turned out to be very good. It had a very nice flavor and tasted delicious with the Mirchi Ka Salan. 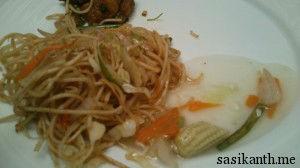 The Noodles were spicy and very good, while the Chow sauce was a little too bland.

I didn’t taste the Dal, Sambar and Curd Rice, but amma said they were good. 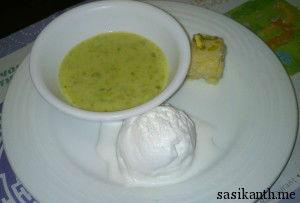 On the desert front, the Coconut Barfi was good, not too sweet, just perfect. The experimental Mutter Kheer was very very good. Creamy and luscious!

Overall, a decent buffet. Though the spread was quite small, all the items on it tasted good. The service was pretty decent, and I liked the ambiance. It would greatly help if they could increase the number of items on their spread (maybe add another soup, starter and couple deserts). Nevertheless, for 260 bucks, it’s quite a meal!!