Indijoe used to be one of my favorite restaurants in town about 6 years ago, but for some reason, stopped visiting it after a point. On a weekday, I finally came back to this place for their buffet. At around 2:00 PM, the place was packed. There were a bunch of guys (waiters) standing at the door, but none of them were interested on my entry, so I had to look for myself and find a table. Things were exactly the same as I remember them from the last time I was here, most of them in indecorous condition. The seat cushion was a little ripped, and in general, the place felt gloomy.

The soup and starters were not being served at the table, so I went ahead and got some for myself. On the veg front, there was Vegetable Broth Soup and for starters, there were Crispy Fried Okra, Potato Chilly Garlic Fries, Banana Fritters, Veg. Tikkies, Cabbage Bhel and Nachos with Salsa sauce apart from the non-veg counterparts. 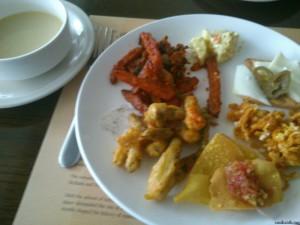 The soup was plain, had no real flavor and was boring. Of the starters, except for the Potato Chilly Garlic fries and the Cabbage Bhel, nothing else was memorable. The Fries had good flavor to them, while I thought the Bhel was pretty creative. The Banana Fritters were a bit soggy and oily, while the Okra and Tikki were decent.

Next I tried the Baked Spinach with Corn and Mushroom, and Mixed Pepper Polenta. I took another serving of the Fries, Bhel and the Tikkis. They had a live counter serving Omelettes as well, but didn’t try them. 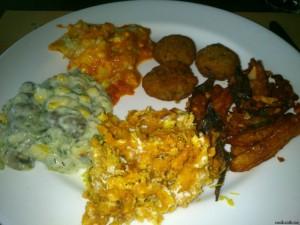 The Polenta had dried up, so I more or less got only the dcheese. It tasted alright. The Baked Spinach and Mushroom was creamy and good. It could have done with a little more flavor though. 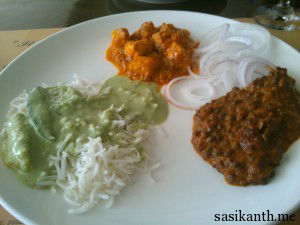 On the Indian front, they had Kadai Paneer and Dal Makhni. I served myself some, got back to the table and asked for some Naan, Roti or whatever, and to my surprise they weren’t serving any. When I asked how come, I was told that it’s a Continental restaurant, and they don’t serve bread with Indian curries. I was asked to eat the curries with white rice or Fried rice. Weird I tell you. I instead went and got myself some white rice with Thai Green Curry, which was pretty decent. I tasted the Paneer and Dal by themselves, and thought they were good. If only they had roti! 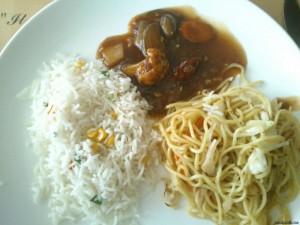 Next I got some Chinese food for myself – Noodles and Fried Rice with Vegetables in Hot Garlic Sauce. The Noodles tasted pretty good, while the Fried rice was so so. 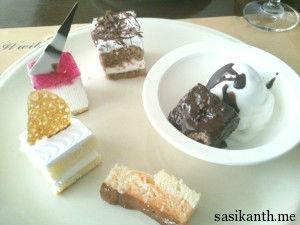 On the dessert front, they had some good stuff – Orange Cheese Cake, Vanilla Pastry, Apricot Cake, Black Forest Pastry, Rice Kheer, and a Chocolate Fountain apart from Strawberry and Vanilla ice-cream. I loved the Cheese Cake and the Pastry, while the Vanilla Pastry was decent. The Apricot cake was not that great. I didn’t try the Kheer. Ice-cream with the Chocolate sauce tasted yum.

Overall, an average meal. The desserts were impressive, but everything else was just decent. Them not having bread for the Indian curries and reasoning that it was a Continental restaurant was the highlight of the entire meal. The service was mediocre; I wasn’t served with the complimentary soft drink until I half way through. Ambiance, as already mentioned, needs to be taken care off. The place was too loud as well. Give it a shot, but for the price you pay, there are many other places which serve a better buffet.