About a month ago, was called upon by a few foodie friends for a tasting session at Olive Bistro. Though I visited the restaurant pretty recently, decided to give it a try for it would give me an opportunity to try more dishes. On a bright afternoon, here I was with six other foodies inide the closed dining section. Ambiance wise, the place looked very bright (for the shades were pulled up), and it actually looked better than during the night-time.

We started off with drinks, and I asked for Peach & Apricot Milkshake. A while later I also ordered for a Litchi Iced Tea. 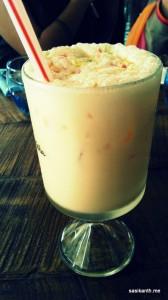 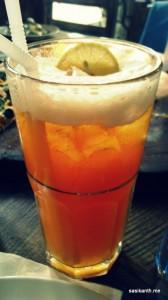 The milkshake was creamy and the flavour was perfect. While it was a little too sweet for my liking, it was still a great shake. The Litchi Iced Tea was absolutely perfect and one of the best iced tea I’ve ever had. 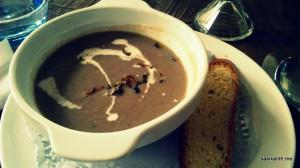 Next I asked for the Mushroom Soup. This again was very thick and creamy, and tasted excellent. I loved the strong mushroom flavour.

While other foodie friends ordered a lot of meat starters, I asked for Veg. Pizza Pockets (Panzarotti) and Saffron Arancini. 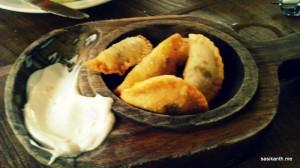 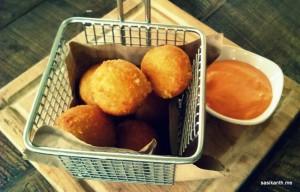 It is well-known that the service at Olive Bistro is slow, but the fact that it took close to an hour for these to be served was quite disappointing. Furthering adding to my misery (and hunger), neither of them tasted any good; the Pizza Pockets had barely any filling in them with no sight of cheese, while the Arancini stuffing seemed uncooked. I was really hungry and craving for food and that was the only reason I gulped them without any qualms.

Everyone at the table wanted to try The All Veg on a Thin Crust pizza, so. 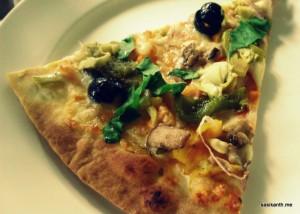 The All Veg Pizza on a Thin Crust

The pizza was served in reasonable time (surprisingly) and was bigger than what was served the last time I was here. While the crust was neat, I was not really satisfied with the pizza for it tasted pretty bland and there was barely any cheese. 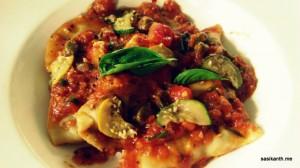 For some reason I was expecting this to be served in a creamy sauce, but it was in fact served in a dry tomato sauce. While it tasted alright, the ravioli stuffing was also pretty dry and I could neither taste the almonds nor the creamed spinach. Not the best ravioli.

To finish the meal, on recommendation, I ordered for OB Signature Profiteroles. 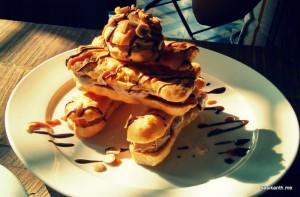 While Profiteroles were not something I would have ordered in general (for I would have preferred something more creamy), these tasted pretty good and crunchy.

Overall, while few items tasted good, it wasn’t a great meal altogether. I was more or less disappointed with the starters and the main course items, so it actually a disappointing meal. To add to that, the service was pathetic. If I were paying for the meal (not a tasting session), I would have probably stormed out of the place for such lethargic service. The restaurant might have a huge fan following and tons of regular customers, but it can definitely count me out of that list for I don’t think I’d be coming back to this place in the near future again even if it is a tasting session.