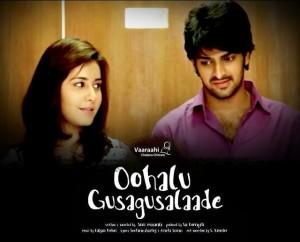 Oohalu Gusagusalade happens to be one of the surprise hits of the year, and it is not without a reason. Well canned with a simple storyline, this movie is surely refreshing!

Scripted and directed by Srinivas Avasarala, the story revolves around a shy guy taking the help of his friend to woo his girl, little knowing that the friend loved the girl in the past. It’s an old story, yes, but Srini presented it in a very refreshing way. With relatively new cast, Srini excels in directing the first half. While he does pretty good in the latter half as well, I thought he failed to invoke emotions. The lead letting go of his love so easily, with a smiling face was lamentable. But now that I think of it, it might have been intentional to avoid the regular emotional scenes and show everything on a lighter note. Screenplay is very effective as well.

Shourya comes up with an exceptional performance as the guy caught up between love and family. He has ease to his acting, and is way better than any than the other breed of so-called actors. Rashi Khanna is really cute and puts up a fine performance. I’ve always liked Srinivas Avasarala’s style of acting and he doesn’t disappoint. Every cast member comes up with notable performances.

Music by Kalyani Koduri is pretty decent. While songs break the flow at a couple of instances, the tunes are really peppy. Editing by Kiran Ganti is decent, and so is the cinematography by Venkat Dileep.

Is it worth your time and money??: Definitely yes. It’s a refreshing film with some fine performances. Though it lacked emotions, the flow of the film is great. A film not to be missed this season.

Worth mention: The cute little love story in the first half, and the climax scene.