A friend of mine visited Hyderabad from Bangalore and wanted to eat Paradise Biryani. Though I told her that there are better places to have Veg. Biryani in Hyderabad, she insisted on Paradise. So at a little past noon, we walked in to Persis restaurant at Hitech City. The place was packed and we sat at a table for two in a corner. Ambience wise, there was nothing great; it actually looked more like a function hall converted into a restaurant.

We ordered what we were here for, the Vegetable Biryani. 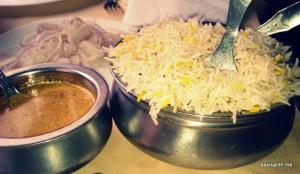 And it was served right away, in less than five minutes. For the price we were paying, and in comparison to other places, I thought the quantity served was less. On taste front, the rice was well cooked and the masala tasted pretty good, but overall it was pretty bland. We probably should have asked for double masala. The Salan was good and went well along with the biryani.

To give my friend a taste of Hyderabadi desserts, I asked for one-by-two Khubani ka Meetha with ice-cream. 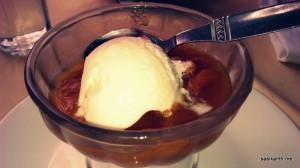 As expected, this took longer to be served than the Biryani. One look and it seemed like canned dessert (because of the color, but maybe it wasn’t). It tasted alright, not too sweet, but nothing great either.

Overall, an average meal. My tummy wasn’t really full for the quantity of biryani was dismal for 200 bucks. The service wasn’t great either and neither was the ambience. It just seemed like an overpriced affair in existence thanks to the brand name, and ya, maybe their non-veg food.

PS: My friend also ordered for a takeaway of the Biryani. This cost 160 bucks (AI), and quantity seemed much more than what was served in the restaurant.