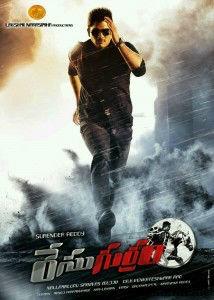 Right from the word go, I was cursing myself for coming to watch this movie. The family sentiment seemed contrived, acting too loud, romance illogical, and the list goes on. But surprisingly, after almost 3 hours, I left the theater satisfied (how is that even possible?).

Scripted and directed by Surender Reddy, Race Gurram starts off just like any other commercial Telugu movie, with phony sequences and loud acting. Entire first half continues on the same path, where it is established that our hero, Lucky has irreparable issues with his cop brother, Ram. The reasons for this hatred between them seemed so stupid that even their parents can’t help. While these guys are fighting, in comes our (can’t even lip sync) villain, who wishes to kill Ram. And the rest of the story, or second half, is about how Lucky gets involved in between. Luckily for us, this is when the movie gets interesting. While the first half seemed dull with mediocre screenplay, Surender manages to pull half the later half exceedingly well. The overall direction though could have been much better.

On acting front, it’s more or less a cake walk for Arjun. His body language is superb, and he performs with ease. In my opinion, he is talented to take up further challenging roles than the ones he’s essaying at the moment. Shruthi looks gorgeous in her “heroine” appearance (a couple of scenes and all songs). Shaam seemed alright while Ravi Kishan was over the moon loud, and irritating to an extent. The fact that there is no lip sync for both these characters even in close up shots was sad. The rest of the casting is alright, but acting wise, everyone was below par. Nevertheless, one man, in his brief appearance towards the climax, makes you forget the mediocre acting and every loophole thus far in the film. Brahmi a.k.a Kill Bill Pandey, take a bow! After a long long time, it was great to watch Brahmanandam in a strong role. He is absolutely entertaining.

Though almost every songs barges in for no reason, music by Thaman is pretty neat. I liked ‘Cinema Choopista’ and ‘Down Down Duppa’, the latter especially for the choreography and picturization. Background score was decent. Editing by Gowtham Raju is alright, while cinematography by Manoj Paramahamsa is of top-notch quality. Production values are excellent.

Is it worth your time and money??: If it weren’t for Kill Bill Pandey, I probably would have said NO. Except for Arjun, I thought everyone else including the senior actors acted miserably. Add to that the pretentious characterizations. Nevertheless, the screenplay in the second half, Bunny’s strong screen presence and Bramhi come to the rescue, and you walk out of the theater satisfied (like I did). So just for that, you can give it a watch.

Worth mention: Every frame with Kill Bill Pandey!