My brother had dined at Republic of Noodles a while ago and loved their food. So when he saw a Snapdeal, we were all for it, and were here on a Saturday night for dinner. The place was empty and we were the only guests for a while. The ambience was pretty decent, and the decor was alright. We made ourselves comfy at a corner table.

We were a little hesitant to order appetizers, but ended up ordering Grilled Mushroom with Burnt Chilly and Tamarind Marinade. We were told it would be very spicy, but decided to try it. For the main course, we had Bangkok Style Pad Thai Noodles and Thai Chilly Basil Fried Rice. 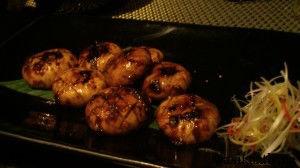 Though the restaurant was empty, it took quite a while (about 30 minutes) for the food to be served. The starters and the main course were served together. The quantity of Mushrooms was very less. They were cold, and not even close to spicy, and all we could taste was the tamarind. Disappointment! 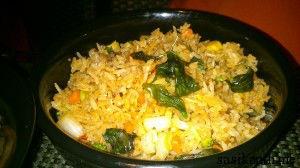 The Thai Chilly Basil Fried Rice was yummy. It had lots of vegetables and the rice was perfect. I’ve been craving for some good Basil Fried rice for a while now, and this was what I needed. 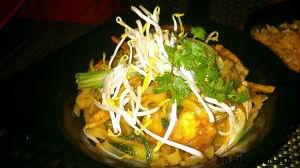 The Pad Thai Noodles were very well presented. The noodles tasted good, but I thought they were a little too sweet than sour. While eating, my brother found a huge chunk of something on his plate. We initially thought it was a piece of chicken or some kind of meat, but to our horror, it turned out to be a paper napkin. We immediately called for the waiter, and he confirmed the same. The whole staff came down to our table and started apologizing for the fiasco. It was apparently a paper napkin they used to clean their vessels before cooking. Whatever the case, that was something unacceptable.

The ambience was decent, and the food was alright. The prices are much higher than any other Thai or Chinese restaurants in town, but not many complaints for that. It was the paper napkin incident that spoiled the meal for us. Thankfully, the staff was courteous enough to accept their mistake. Even after our insistence for the bill, they waved it off for us. I just hope such incidents don’t repeat again.

To be fair, give it a shot at your discretion!!