Wanted to eat something yum the other night but didn’t wanna travel too far either. Searched on Zomato for a reasonably priced, high rated restaurant near Ameerpet, and found Shirji Rasoi. Wanting to explore and experiment, rode down to this place which is in the interiors of a building opposite Vijaya Textiles on Dharam Karam road. You need to walk in through another restaurant to reach Shriji (which I thought was pretty weird). Anyhow, the place is more of a shed with the kitchen in the background, with no ambiance of any sort. A number of tables were placed very close to each other, few under open sky, and I sat in the center, trying to get a view of the small TV placed in a corner.

I had to call for the waiter twice before he came down and handed me a menu. I asked him what their speciality was, and after a minute of cluelessness, he pointed at a special menu board hanging next to me (which had nothing special). He didn’t have any idea on what those items were either. Realizing that he was useless and had no clue on the offerings, I ordered a Punjabi Chole Kofta (for it sounded different and I was curious) and a couple of Phulka. 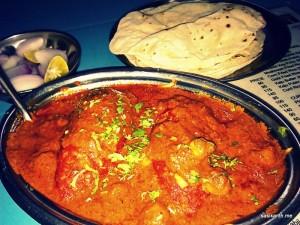 The food was served in about 15 minutes (I was actually starting to get a little impatient for I was very hungry). The curry looked good, and apart from a couple of Koftas made of mashed channa and aloo, there was chole in the gravy (quantity of which seemed less for the huge koftas). On taste front, while the Kofta was decent and well cooked, the gravy was pretty spicy. The Phulkas served along were soft and good. 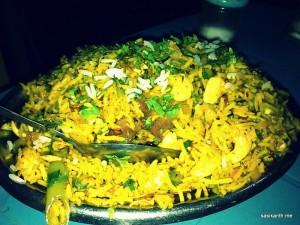 Wanting to try more dishes, I ordered for a Kaju Pulao and it again took forever for it to arrive. Filled with as many cashew nuts as different garam masala – cardamom, cloves, pepper, cinnamon stick, bay leaves, etc, it tasted pretty good and I actually liked it better than the Kofta. However, it was quite overloaded for Pulao and so tasted pretty much like mild Biryani.

Overall, the food was pretty decent. However, the service was pathetic. The waiter was getting into arguments with customers and was acting callous. Ambiance too isn’t great for it’s a shed, and the tables aren’t so clean either. For the price, quantity of food served is good, and so is the food. So I’d suggest this place for a take away rather than dine-in. Give it a shot for some cheap fare Indian food.