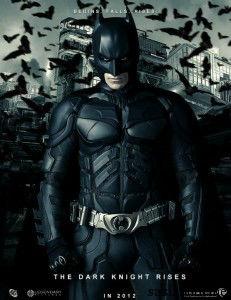 The Dark Knight has finally risen, and he does it with a bang!! The Dark Knight Rises is nothing short of spectacular, and is a perfect ending to the franchise. It ain’t a perfect film by any means, but that doesn’t stop it from being awesome!!

Christopher Nolan’s films are all different for none of his movies concentrate on action alone. There’s drama, a lot of dialogues, and on most occasions a convoluted story (Memento, Inception, etc.). This one ain’t so difficult to understand though, its plain simple (Story by Nolan and David Goyer). Batman returns to Gotham city after a 8 year exile to fight mighty Bane, a protegé of Ra’s al Gul, who proves too tough for him to handle. He falls, and Gotham needs him to rise one more time. Nolan puts all of this to screen with ease. The characters are very well sketched, and well-connected. The action sequences are very well choreographed, and the IMAX is used perfectly. But, the film is definitely too long, and at times, the screenplay (Nolan and Jonathan Nolan) is weak. The build up to the climax is huge, but I thought the punch was missing. I expected a better finish to Bane, but was hugely disappointed. That apart, the direction is perfect, and Nolan has a winner at hand.

On the acting front, Christian Bale has been Nolan’s dark horse. He is a delight to watch on-screen. His performance as the defeated Bruce Wayne is intense and commendable. Anne Hathway is hot as Cat Woman. Bane/Tom Hardy was the best to come across Batman (after Joker/Heath Ledger though). I just wish he got a better finish. Micheal Caine, Gary Oldman and Morgan Freeman are at their usual best, while Joseph Gordon-Levitt is very impressive. Marion Cotillard surprises in her small yet vital role.

Music by Hans Zimmer is brilliant. The background score, especially in the episode where Wayne rises, gives you goose bumps. Cinematography by Wally Pfister is very good and editing by Lee Smith is alright. For a film of this magnitude, I was very disappointed with the graphics though. They seemed very patchy throughout the film.

Overall, an entertaining film. To call it an epic might be going a little overboard, but its close nevertheless. Nolan continues with his fine work and gives a perfect end to the Batman Trilogy (end or a new beginning remains to be seen, thanks to Robin).

Acting: 9/10
Story-Screenplay-Direction: 9/10
Technical Aspects: 8.5/10
Is it worth your time and money??: Do I even need to answer that question?? It’s the biggest movie of the year, and if you still need an answer, hell yeah. It might not be the best of Nolan’s work, but it’s a perfect finish to the series (I hope this ain’t the end!!)