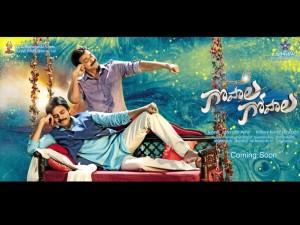 While PK has created enough controversy about religion and religious beliefs, here comes the Telugu remake of OMG – Oh My God! One might have expected it to be under the scanner as well, but thanks to Pawan and Venki, Gopala Gopala entertains without any hassles.

OMG was a simple film with decent star-cast. The moment it’s being remade with PK and Venki, expectations go up ten-fold. Director Kishore Kumar Pardasany (Dolly) stuck to the script without being carried away by the heroes, and therefore excels on scripting front. The screenplay is more or less intact barring a few scenes modified to suit the Telugu nativity, and increased screen presence for PK. However, this doesn’t hamper the flow of the movie. Bottom line, both screenplay and the direction are pretty neat.

While Pawan Kalyan does a good job in a subdued role as Krishna, the movie totally belongs to Venkatesh. Though he seemed a loud compared to Paresh Rawal, he brings a lot of substance to the role. Pawan, as expected, entertains. Shriya is alright as Venki’s wife. Posani has a meaty role, and he excels. Mithunda is alright, and so is the rest of the cast.

Music by Anoop Rubens is good. However, he needs to come up with new tunes. Background score is decent. Cinematography by Jayanan Vincent is neat. On the downside, editing by Goutham Raju is pathetic. There are multiple instances where scenes end abruptly and you can notice the patchy work. You’d expect a reputed house like Suresh Productions to pay more attention to editing.

Is it worth your time and money??: Gopala Gopala is a treat for the fans. For the rest of us, it’s a decent watch with a good message. The best part of the Gopala Gopala is the fact that it doesn’t overwhelm you because of its star-cast. While it might not be a great film, it’s definitely worth a watch for its heart is at the right place.

Worth mention: Acting by Venkatesh and Pawan.