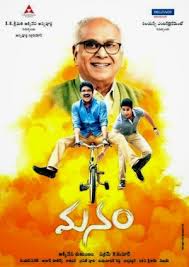 After a successful entertainer (Ishq), director Vikram Kumar has another winner at his hands, thanks to Akkineni family.

Manam is not a great film, for it has numerous flaws in terms of logic and reasoning. But it still works, only because it is earnest, and the effort on everyone’s part is sincere (which shows on-screen). The script is very clichéd, with reincarnation and all such stuff, but Vikram was able to put it all forth in a very effective manner (though it seemed a little unconvincing at times). He used humor to bring out the best from his cast. Though the screenplay was dragged quite a bit at times, it was still effective.

In reality, the film works not because of the script, but because of Nagarjuna, who is the real star of the movie. He is absolutely charming and came up with one of his best performances. He couldn’t have given a better send off gift to his father, legendary actor, ANR. Whilst ANR has limited screen presence, he entertains us to the fullest one last time. Chaitanya has improved as an actor, but I believe there is still a long way for him to go. Akhil impresses in his cameo. Both Shriya and Samantha have meaty roles, and they performed to their best. Samantha looked very pretty, while Shriya looked elegant. There’s not much of other cast, and I thought Brahmanandam and Ali were wasted.

On technical front, music by Anoop Rubens is a definite asset to the film. Background score is impressive as well. Cinematography by P. S. Vinod adds more color to this vibrant film, while editing by Prawin Pudi is decent. Dialogues by Vishnuvardhan are good. Production values by Akkineni family are excellent.

Is it worth your time and money??: Definitely. It’s a clean film and a perfect family entertainer. While it might seem a bit clichéd and little unconvincing at times, an earnest effort from the entire cast and crew make this film work. Nagarjuna is the major plus point, while watching ANR on silver screen for the last time is a bonus. Watch it with your family. 🙂

Worth mention: The scene in the second half with all three generations of the Akkineni family (and maybe even the climax).