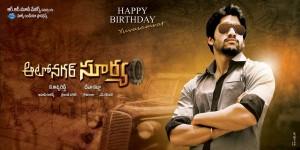 I believe any movie needs a strong plot. Even if isn’t conveyed on-screen, the director should know his script. Unfortunately, Deva Katta has no clue on what he wants to convey, and so Autonagar Surya is close to a disaster.

Set in the 1990’s, Surya is our rebellious orphan living in a union run colony controlled by mafia. Like any other movie, our hero fights the goons from the word go, so much to an extent that he lands up in jail for murder at an age of 16. The rest of the movie is all about him fighting more goons and murdering more people, this time without being arrested. Looks like Deva Katta was very inspired by Hrithik Roshan starrer, Agneepath. I initially didn’t get why he chose to showcase the story in the 1990’s, but later realized that if he portrayed such violence and atrocities in the current age, people would laugh at him. Dev Katta got so confused that he had no clue on what to do towards the end, resulting in one of the quickest climax in recent times. But for the dialogues, the direction and screenplay are pretty weak.

Did I say Naga Chaitanya improved as an actor in Manam review? I would take that back but for the fact that this movie was shot much before Manam. He is absolutely pathetic. Just like Ram Charan in Racha, he tries to imitate his dad and fails miserably. Any B-grade actor would have probably performed better. Samantha looks cute but is as good as a doll. There is a huge cast, most of them come up with average performances. Most disappointing was the characterization of Sai Kumar for he is totally wasted in a purposeless role.

Music by Anoop Rubens is mediocre with songs popping in between for no reason. Cinematography by Srikant Naroj is average while editing by Goutham Raju is pathetic. The film is unnecessarily long with a number of scenes which make no sense. Visual effects by my childhood buddy Asif Bhushan are neat.

Is it worth your time and money??: I don’t think so. Give it a month’s time and it’ll be playing on your television. It’s a different discussion as to whether it’s worth watching it on TV as well.

Worth mention: A couple of powerful dialogues being uttered by one of the most untalented actor in recent times.