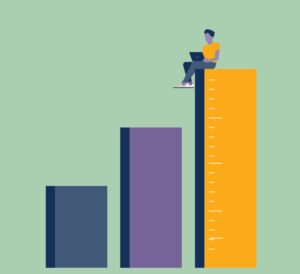 I once spoke on a similar topic, “Education as a measure of success,” at a debate competition in my high school. Speaking against the case, I said that you can never judge someone based on their educational background or grades and that we have examples of successful high school dropouts. I had a good argument, spoke well with conviction, and, long story short, I won the debate.

Twenty years later, a week after I put my daughter in school, I am asking myself this question. Should I be worried about her grades? (She’s still too young, but you know)

I’ve been an above-average student for most of my life. As is with most Indian parents, mine ensured that I studied hard to excel in school and high school. And then came the first hurdle, an entrance examination that would measure which college I got into for my undergrad. You see, the higher the rank, the better the college and your life prospects. When I say that I studied day and night for this exam, you better believe me; my day started at 4:00 AM and ended at 9:00 PM, every day for one full year. Please don’t pity me, for I was not the only one doing this; almost 90% of my peers had a similar schedule. It was a fad back then when every parent wanted their child to study at an NIT or IIT (top Engineering institutes in India) and proudly announce that they have an Engin-heir in the family.

After attending all the coaching classes and taking numerous mock tests, I finally gave the 3-hour exam, which would impact my future. And it did; I ranked 45,739 amongst the approx. 200,000 kids. I was shocked, but more than me, my parents were shocked and disappointed. I remember my dad saying, “how could you do this!” For the first time in my life, I felt like a failure.

With this burden, I paid my way to get admission at one of the engineering colleges in Hyderabad (being an Indian, when I say I paid, read my parents). I now had to prove my mettle; I took it as a challenge, studied hard, really hard, and thought I did well on the first-year exams. I scored a mere 63%. I was like, what, no, this couldn’t be happening. I tried again for the first semester of the second year and failed miserably. This time around, I actually flunked in 2 subjects (it’s a different story that 54 of the 66 students from my class flunked one of the subjects). I was broke, but more importantly, I had failed my parents again. When I mentioned that 54 students from my class failed, their argument was why wasn’t I amongst the 12 who passed. I had no explanation. They didn’t care that I was exceptional in the extra circular activities at college; they just wanted good grades. I lost faith in the system, but more importantly, in myself. I just wanted to get over this, and four years later, I graduated bachelor’s with the same 63% I scored in my first year.

Weirdly though, the job placements at the end of my fourth year weren’t solely based on grades. Firms wanted the best of the best, so they would have their own competitive exams. Another 3 hours of torture for me. As expected, I did not make it to any top hiring firms. But not all hope was lost, for my ubiquitous attitude caught the attention of a small start-up recruiting for a sales role. I cleared the interviews with flying colours, and my grades didn’t seem to matter anymore. Or so I thought.

While I enjoyed this role, I wanted to study space and maybe try for the Astronaut program. No, I was serious. I lost hope in the Indian education system, so, like most of my peers, I decided to pursue the American dream. Now, that wasn’t so easy either. You’d need to give GRE, another competitive exam testing your English and Maths. As was my luck, I failed to get a good score even after studying for and attending classes beyond my work hours. Ironically, I scored the same marks on my official attempt as I did the day I first took the mock test without any preparation or effort. Long story short, I did not get into MIT or the University of Maryland I hoped for, but I got into Mississippi State University.

My parents, still disappointed that I did not get into the top universities I aimed for, sponsored my first semester and my move to the US. My first time away from home and family, I reached Mississippi and boy, I enjoyed my time there. I took the subjects I wanted, and with help from some excellent professors, I was again the above-average student (if not more). I still remember that day when I was sitting in an Orbital Mechanics class and telling myself that I’d done it, I wanted to become an Aerospace Engineer, and here I was. I did my thesis on navigation for Lunar landing, presented a paper at the AIAA conference in Florida, and was shining bright like a diamond in literal terms. I worked at the University to fund my education, and at the end of my two years at Mississippi State, I had a master’s degree with a 3.9 GPA, and my thesis was published.

But I didn’t see the future coming. President Obama had a new vision for the future of human spaceflight and NASA around the time I graduated. In this turmoiled time, I interviewed with some of the top space industry players, but nothing materialized because of my immigration status; they all wanted an American citizen because jobs in space were considered part of National Security. So, I decided to focus on the Indian Space Agency, ISRO. Now ISRO has a very bureaucratic hiring process. They advertise openings through media, and shortlisted candidates are called for in-person interviews. I applied for a few roles and was called for an interview at Thiruvananthapuram.

Here I was in the US, at the start of my Optional Practical Training (OPT), which would give me the right to work in America for at least a year. Do I stay or move to India to land an opportunity to land a job at ISRO? I decided to take the gamble and flew about 9000 miles to India for an interview, confident that I would get the job because of my credentials. Alas, ISRO had other plans; a story for another day. Ten months later, I was attending my third interview at Bangalore, and the clerk reviewing my documents decided (yes, decided) that I was not eligible, not just for this interview but for any interviews in the future. I was aghast; it felt like the world was crumbling around me. The reason, you ask me? Do you remember the 63% I scored in my bachelor’s?  Yup, there it is in my face. Apparently, the ISRO advertisements for the roles I was interviewing for require a minimum of 65% in bachelor’s. I somehow found words to argue with him, saying this was indicated to them all along, right from when they called me for the interview from the US, only for a lost cause. He and a few others suggested I get a PhD if I ever want to work for ISRO. I stepped out of the building and took one of the most significant decisions of my life: to drop my career in Aerospace Engineering and move back to the second-best thing that I did, people management.

Now that’s not where things ended in terms of grades for me. A year after working in another start-up, I decided to pursue an MBA (or its equivalent) to further my skills in management. My parents, as usual, were there to support my education once again. Luckily, this time around, the 4-hour GMAT was not as dreadful as my previous exams; I scored well and moved to Singapore and Dubai to get my Master of Global Business degree. I was a pretty good student (again) and was amongst the top 5 of my class at graduation. My parents attended my graduation ceremony and were super proud. I was equally happy. Good enough?

Apparently not. What followed over the next few months of graduation was the biggest lesson of my life. For those who don’t know me, I am a big Sony fanboy. So, when Sony was interviewing candidates for a job as part of campus placements, everyone in my class was rooting for me to get it. I cleared the first round in a zap and was at the final stage alongside a Russian classmate. Another long story short, he got the job even though he had a few backlogs and was amongst the bottom few of my class while I was one of the toppers. Why? Cos, while I struggled to make the Japanese interviewer understand why I switched from Aerospace Engineering to marketing, this classmate just connected with him. That day was an eye-opener for me. It took me about six months after this incident to finally get placed, and guess what? I made the least money compared to my peers. Thankfully, the job was satisfying.

So, ending my rant, I say this. What you study, where you study, and your grades don’t get you anywhere. Yes, they help you create a path, but what gets you places is your attitude and skill set. Sometimes I look at my LinkedIn feed and see some of my mates who barely passed their exams doing great for themselves and feel sad and stupid. But I soon realize that they have other skills that have helped them reach where they are. Maybe it was an easy path for them, while mine was a struggle. Who am I to judge, right?

Whatever the case, I’ve learnt life’s lessons the hard way; grades aren’t the only things matter. I am still far from achieving my life’s goal and, hopefully, won’t study any further. And even if I do, I know what matters.