Dhaba 49 happens to be the closest Indian restaurant to our place, but we never, for whatever reason had the opportunity to dine in here over the last four months we’ve lived in London. However, come last Tuesday, utilizing Just Eat’s Cheeky Tuesday offer, we ordered a Paneer Butter Masala, a couple of Butter Naan, and a Pilau Rice.

Though the place is about 500 meters away from our house, it took about an hour for the order to be delivered. (I actually cancelled an order a while ago cos it said the estimated delivery time was about 90 minutes). 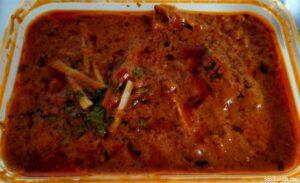 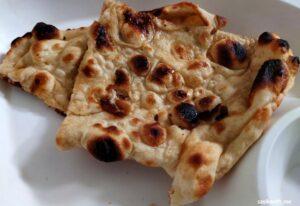 The Paneer Butter masala (PBM) had too much ginger and was a little too tomatoey for my liking. The paneer however was fresh, so we managed to empty the box. The Butter Naan could have done with some more butter. 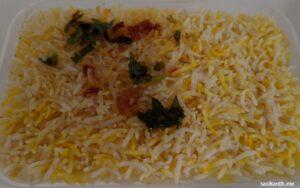 The Pilau rice was decent, but again, like with almost every Indian restaurant in London, bland. I wish people added a little more salt while cooking the rice, or at last after. The rice, also, was too oily.

Overall, a mediocre meal. I read good reviews about this place online but maybe because of my expectations, was disappointed. PBM is the basic Indian dish for any vegetarian, and according to me, it tells you how good or bad a restaurant is; if you can’t get your PBM right, you can’t get anything right! While Dhaba 49’s PBM wasn’t totally bad, there is room for improvement. Also, the hour waiting time is a bit too much especially when they are so close by.

I’d definitely dine at this place sometime soon, once my extended family comes by. Until then…

Looking for Vegetarian food options near my place on Google, stumbled across this small Vegetarian/Vegan joint on Portobello Road. Given that this was a Saturday, headed out to try this place as well as to experience the Portobello Road Market.

We walked in at about 3:00 PM and saw this large spread of offerings from different cuisines. It is an order-your-meal kinda place where you pick anything you want from the offerings, in either small, medium, or large boxes. There is a small seating area in the store but that would cost you extra 60 pence. 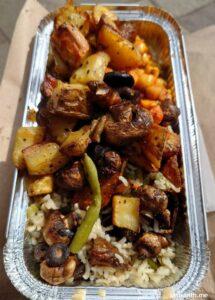 We opted for the large box as we wanted to try a bit of everything, and this gave us more scope to do that. We asked for some lasagne, grilled mushrooms, beans, rice, vegetables, broccoli, a couple of other things I don’t remember, and loads of potato wedges.

The overall meal tasted good, but some of the items were a little too bland. I wish they had some kinda condiments and sauces to make things wild. The large box cost us about 10 quid, the medium is £8.95, and the small is for £7.2. I am not sure if these prices are justifiable, but for the variety, maybe it deserves a try once in a while.

After a fruitful day of celebrating Queen’s Platinum Jubilee, we were looking for a place to quench our hunger. Felt like eating Indian (again), and decided to drop in at Saravana Bhavan at Leicester Square. There was waiting, and while we did that, I looked at their menu and realized that everything was overpriced (as we just dined at SB at East Ham a few days ago which wasn’t expensive at all). So looked for alternates in the area and found this small Indian eatery right around the corner.

A couple of blocks away from Empire Cinemas (Cineworld), located right next to Bella Italia, you’d probably miss this unless you look closely. Apna Adda is a small shop with just a couple of tables. Having realized that dining in will not be possible, we decided to do a take-away, and ordered a portion of Veg. Spring Rolls, Veg. Hakka Noodles, Kaju Curry, and a couple of Naan. I was told it would take about 30 minutes for the order to be ready.

We explored the Piccadilly Circus area for a while, picked up the food, and hopped on a bus home. Our lil one was hungry, so we opened the Spring Rolls on our way. 7 small rolls were served along with some sweet chilli sauce, and they tasted alright. They probably were frozen ones you get at a supermarket, which justifies the size and more or less bland taste.

We were really excited to try the noodles and didn’t waste any time dug in the moment we reached home (without clicking any pictures). Unfortunately, they turned out bleh. With excessive soy sauce, they had a strong taste which I did not enjoy.

The Kaju Curry however was yummy. Loaded with cashew nuts (Kaju), the tomato gravy was perfect. I would have maybe preferred it a little spicier though. The Naan was decent, but the corners were a little too thick.

Overall, an okay meal. Our Indo-Chinese experience was mediocre while Indian food turned out to be good. Reasonably priced, they have quite an extensive menu. I’d definitely try this place again, hopefully soon!

Dropped in here last week for dinner before a movie, and ordered a Vegetable Biryani. I then settled at a table on the street where there were quite a few entertaining performances to keep me engaged while the food was being prepared. 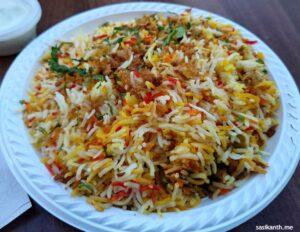 In about 10 minutes, the Biryani was served alongside some raita. This was dum-style Biryani with the curry at the bottom and rice on top, garnished with some coriander and fried onions. While the rice was perfect, I thought the curry was a bit on the spicy side, which made me sweat at the end of my meal. It may not be the best Biryani, but wasn’t bad either.

On a lazy Saturday afternoon, we were in the neighbourhood to get our Indian groceries but were hungry as well, so we decided to hog first. Brick Lane is a street full of Indian and Bangladeshi food joints, with people calling out to you while walking on the street to try their restaurants. This was pretty late in the day for lunch (around 4:00 PM), so most of these eateries were empty. Not wanting to be the only patrons, we decided to walk into a restaurant that had at least a few tables occupied, and this turned out to be Aladin.

Located right opposite Brick Lane’s Food market (Upmarket) which houses some international food stalls, Aladin is a sizeable joint spread across two shops and is pretty much on the busy street so can be loud at times. We were led to a table of 6 where 2 seats on either side were already occupied by a couple of girls, and we were like, what? Then the guy separated the table to make it a 4+2 seater with little gap between them. We settled down uncomfortably, for I felt that we were intruding into their space. Almost all the tables were similarly placed, cramped next to each other. On the bright side, the place was brightly lit and looked spacious, thanks to the mirrors on the walls.

The entire staff seemed to be in a hurry which gave it an impression of a fast-food joint rather than a dining restaurant. One of the many guys came with the menus, and without even giving us any breathing space. asked if we wanted papad. I said no without thought, and he removed the pre-set plates from the table. We eventually asked for the papad while placing our order, and he got the plates back along with some condiments 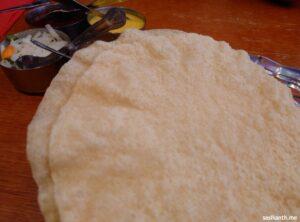 For the main course, we ordered Paneer Pasanda/Korma, a Butter Naan, a couple of chapathis, and a Vegetable Biryani. 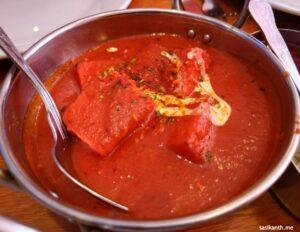 The food was served all at once in about 15 minutes. While the Paneer Korma was decent; the gravy was little on the sweet side and could have been more refined. 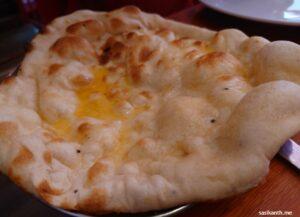 The Naan was full of butter, soft, and tasted good. 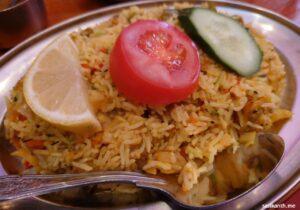 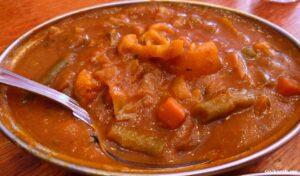 The Biryani was served alongside some Mixed Vegetable Korma. The Biryani, while good, could have had more vegetables and little more masala (and salt) for it tasted bland without the korma, which in itself was alright.

Still hungry, for the portions weren’t that great, wifey decided to get a portion of Garlic Rice which was served in a few minutes. This had a lot of garlic, yes, but was dripping in oil. Again, needed salt.

Overall, an average meal. The food was decent but the experience wasn’t great. The hustle around us was getting too much to handle. To add to this, a scribbled note was presented to us as the bill for a whopping 40 quid, which I later, after stepping out of the restaurant, realized was at least 7 or 8 quid more than what we should have been charged for what we ordered (and if I read the scribble right, we were charged £2.5 for the papad!). This place is apparently voted as “One of the World’s Best Curry Houses'” in London, but I highly doubt they can be anything with this pathetic service. 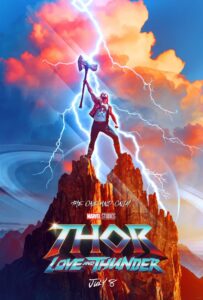 Thor: Ragnarok happens to be one of my favourite Marvel films for it was super fun. The banter and tiffs between Thor, Loki and Hulk (and maybe Valkyrie) gave us some best on-screen chemistry between the characters. Thor: Love and Thunder, on the other hand, while a fun film, lacks the spark and emotional connect that its predecessor did.

Directed and co-scripted by Taika Waititi, the film starts with the reinvented Thor at peace, yet desperate for a new purpose, alongside the Guardians of the Galaxy in a galaxy far, far away (no pun intended 😜). A distress signal brings him to earth where he finds his ex-lover, Dr. Jane Foster, as the Mighty Thor, holding his ex-hammer, Mjolnir. They soon realize that Gorr the God Butcher, having lost his child, Love, is, as his name suggests, on a god hunting spree. The rest of the film is about how Thor and the rest of the gang defeat Gorr.

While the storyline on paper is effective, it felt like the emotions were amiss in this almost 2-hour film which aims for a lot. There is a major clash between the serious and goofy elements, with no room for us to digest the former, which makes the film a little too overwhelming at times. The screenplay by Waititi & Jennifer Kaytin Robinson is a hit and amiss for there are a lot of tonal imbalances.

Chris Hemsworth is at his best playing Thor, and it feels like he was born to do this. However, his character arc could have been better developed for he seemed silly at times. Natalie Portman is mighty impressive as the Mighty Thor and does full justice. I however thought that her make-up was inconsistent (and maybe a little too much). The winner however is Christian Bale who acts his heart out as Gorr. Though he is the antagonist, his performance in the backstory makes you feel for him. Russell Crowe surprises with his act as Zeus.

Music by Michael Giacchino and Nami Melumad is alright. There are several featured songs effectively used in the movie. Editing by Matthew Schmidt, Peter S. Elliot, Tim Roche & Jennifer Vecchiarello could have been better for I felt that some value-adding emotional chunks maybe, have been left out. The cinematography by Barry Idoine is perfect, and I loved the way he bled the colours out in the scenes involving Gorr.

Is it worth your time and money?: As I said earlier, it is a fun movie, yes, and worth a watch, but not funny enough. Thor: Love and Thunder has its heart in the right place, but it aims for a lot without paying much heed to the emotional elements. Only if Watiti had spent a few more minutes on balancing the film, alas!

Worth mention: Christian Bale as Gorr the Butcher.