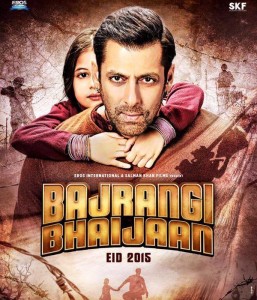 Scripted by Vijayendra Prasad (the same guy who scripted Baahubali), Barjangi Bhaijaan tells the story of a young Pakistani girl and her saviour who helps her reach home. Director Kabir Khan does full justice to this simple thread by narrating it beautifully. Instead of flexing muscles, Kabir uses charm and empathy as his way out. Yes, the script is impractical and sometimes silly, but it is showcased so earnestly that you start to ignore the flaws. The movie’s first half, which establishes the characters, seems long and draggy, but the second half is truly entertaining in every sense. The direction is top-notch, for Kabir was able to bring the best out of every actor. The screenplay, too, is neat. I loved how he narrated the flashback episodes as stories intertwined into the script.

Salman Khan is brilliant as Pavan; he plays the character with so much ease while portraying the right emotions and oozing charisma. His comic timing is spot on. Kareena Kapoor Khan has a limited role, but she does well. Nawazuddin Siddiqui is perfect as the TV reporter who helps Bajrangi; he definitely is one of the finest actors in our industry. The movie’s real star is the 7-year-old Harshaali Malhotra; she is stunningly cute, and her expressions are priceless.

Music by Pritam is average. Except for a couple of songs which were forcefully inserted into the movie and should have made the cut on the editor’s table headed by Rameshwar Bhagat. The cinematography by Aseem Mishra is perfect; the way he used drones to showcase a few shots is worth mentioning.

Is it worth your time and money?: It’s a super fun movie, and Salman and Harshaali will charm their way into your hearts. Unlike most of Salman’s films, this one has its heart in the right place and is definitely worth a watch!

Worth mention: All the scenes with Harshaali and Salman, particularly the India-Pakistan cricket match episode where Harshaali acknowledges that she’s from Pakistan.