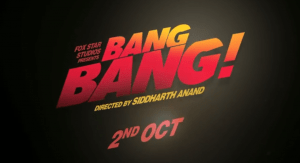 The trailer made a lot of noise, and the promotions have been extensive. If that’s anything to go by, the film’s a disaster. And bingo!

I’ve never been impressed with Siddharth Anand. All his previous films bombed big time at the box office, so one would have thought that he’d make sensible films now at least. But no, all he does is make a film which makes no sense. Bang Bang is an empty pot, makes a lot of noise. And he does this when he has a relatively average script (Knight and Day) at hand. Instead of just sticking to it all through, he just creates a mess, thanks to some slow and terrible screenplay. I mean, he ripped most of the original’s dialogues and some episodes frame to frame, then why not stick to the original screenplay in whole? Right from the word go, everything in the movie seemed too contrived, and there’s no such thing like logic. Common, no one moves countries so easily without being noticed; and what’s with the race car? Another big problem is that Bang Bang feels like a Hindi movie you’ve already seen, and therefore is very predictable. Direction is mediocre, and someone needs to tell Siddharth Anand that just visuals, stunts and fights aren’t good enough; he still needs to use the script which he officially borrowed (apparently) in an slick manner. It’s supposed to be a thriller for gods sake, not a drama!!

Hrithik looks amazing, and puts his best foot forward (like always). He carries the entire film on his shoulders, but that isn’t good enough. Katrina looks fine and acts in bits and pieces. She’s hot, ok, but she’s no Cameron Diaz! Both of them dance exceptionally well, especially in the title track. The rest of the cast, well, is alright.

Music by Vishal-Shekhar is decent. The title track is really peppy and ‘Meharabaan’ is good as well. Cinematography by Vikas Sivaraman and Sunil Patel is pretty good. Editing by Akiv Ali could have been way better.

Is it worth your time and money??: Unless you have nothing better to do over the weekend, give Bang Bang a miss. Hrithik is the only plus point in this sinking film.

Worth mention: Hrithik’s MJ moves in the title track. But you have to sit through 156 minutes to see this, so all hail YouTube!

PS: Why would you want to remake a movie which in itself wasn’t a success?? :O