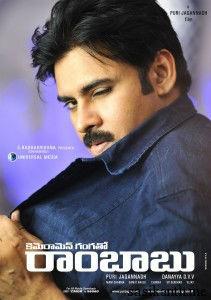 Post Gabbar Singh, the expectations from Pawan Kalyan are really high, and him teaming up with Puri Jagannath makes things even better. But sadly the film disappoints. It is not because of the lack of punch dialogues nor Power Stars charisma, but due to lack of a proper script. Businessman was a success because of its effective screenplay, but Puri Jagannath totally falters with screenplay in this film. The script does not have a basic conflict point, and that in itself is a main drawback.

The first half is very predictable but alright, but the second half is pretty much a disaster for it totally goes haywire. I like Pawan Kalyan, but honestly, he’s no Chiranjeevi. Pulling off Tagore like stunts just doesn’t work for PK. But he still manages to woo the audience with his charm and powerful punch dialogues. He looked a wee bit old in a couple of scenes though. Tamanna has very limited role, and I thought she went a little overboard to get into her tomboyish character. There’s no special mention on the comedy front.

Except for the Jaramochindi song, the music isn’t so great either, but PK dances well. Cinematography Shyam K. Naidu is alright. Most of the aerial shots are graphic based. Editing by S. R. Shekhar could have been a little better. Productions values could have been way better as well. But most importantly, if only Puri worked a little more on the script and screenplay!!

Acting: 8/10
Story-Screenplay-Direction: 6/10
Technical Aspects: 7/10
Is it worth your time and money??: It’s totally upto you. I enjoyed the first half, but the second half was a total bore. PK nad Puri’s dialogues are the plus point of the film, while lack of conflict point and disastrous screenplay cause the downfall. There was no need for Rambabu to be a reporter to do what he did, and neither was there a role for Ganga. So now make your guess on how effective Cameraman Ganga Tho Rambabu is.