Place: Flavors of India
Location: Craven Road, Paddington
Cuisine: Indian
Meal: Dinner (with wifey and our lil one)
On: Sunday, 22 May 2022

We’ve been eating out in London for a while now, but this happens to be my first restaurant review (hopefully the first of many). After a fruitful day at Hyde Park, we were looking for some good Indian food and happened to find Flavors of India on Google. Located on Paddington Station Road, the restaurant is easy to locate with a Sardar figure standing guard.

We walked in at around 9:15 PM and the place, split across 2 floors, was more or less full. We walked up to the first level and settled down on a table for 4. The place, in general, was cramped for there was not a lot of room between tables. There was also a large group sitting behind us making the place loud. We were really hungry and were waiting for someone to come and take the order, but no one showed up for a long time, even after multiple attempts of calling for them.

When he finally did, we ordered a portion of Tandoori Stuffed Mushroom, Shahi Paneer, a Garlic Naan and a Plain Naan. This was around 9:30 PM. The steward did inform us that the kitchen was full of orders and it will take a while for the food to be served, but never mentioned how long. And so, the wait began.

Apparently, there was some problem with the air-conditioning on the first level, and even with the windows open, we were suffocating. Maybe it was because of the hunger as well. Anywho, we decided to come down (which was relatively cooler) and find a table for ourselves around 40 minutes after we placed the order (still no food). 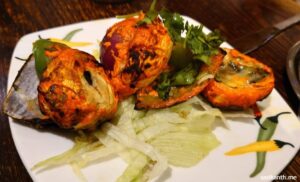 At about 10:15 PM, the mushrooms were finally served, and I was appalled by the portion size; 3 small button mushrooms stuffed with some cheese, served along with a couple of peppers, onion, a tomato, and some lettuce. The taste was decent, but man, 3 pieces of mushroom? 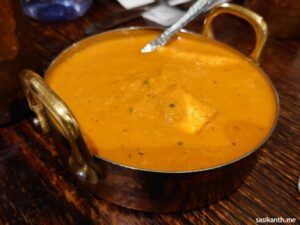 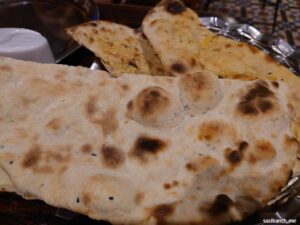 Over the next few minutes, the Shahi Paneer and Naan were served. While not as bad as the mushrooms, the portion size of the paneer again seemed ridiculous for a main dish (I wonder what they serve for a side!). The paneer was fresh and succulent, and the gravy was good, but a little too tomatoey for my liking. The Naan however was hard as a rock. Our lil one usually eats the bread but she didn’t even touch it for it was so kadak. The Garlic Naan was better.

When the subzi and roti were served, I asked for a portion of Vegetable Biryani. The waiter said that it might take forever again, but we didn’t want to walk out hungry. 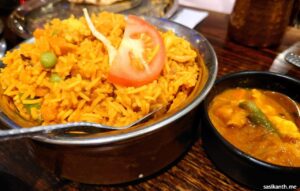 Surprisingly, the Biryani was served in a jiffy, and the portion size was decent. Served along with a Vegetable Korma, the biryani was very wet and spicy. I soon realized that the chef just added some pulao rice to the korma and sent it up as biryani (that confirms how it was served in a few minutes). The taste was okay, but as I said, too spicy.

Overall, a mediocre meal and experience. For the small portions which barely filled our tummies, the bill came to a whopping £31. The ambience isn’t great and the service was bad. There was absolutely no communication, and every time we asked where the food was, we were almost shushed. When we walked out, some travellers were inquiring about the place, and I told them the same thing which I now tell you, don’t go in there!