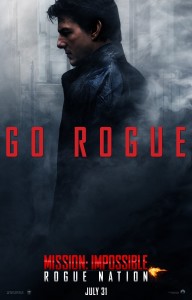 Mission: Impossible – Ghost Protocol happens to be one of my favourite action movies. Brad Bird ensured that there was enough adrenaline pumping action to keep you enthralled for over 2 hours (in spite of a mediocre storyline). While Mission: Impossible – Rogue Nation doesn’t have as many adrenaline rushing sequences as its predecessor, it’s still a good watch!

Co-scripted and directed by Christopher McQuarrie, who earlier worked with Cruise in Edge of Tomorrow and Jack Reacher, the film starts off with Ethan Hunt in search of the mysterious Syndicate while the IMF is disbanded and absorbed into the CIA. It’s now up to Hunt to go rogue and save the world. While the script goes haywire at times and the screenplay is lazy, McQuarrie ensures that the limited stunts are amazingly good. Be it Cruise’s jaw dropping drop into the cooling machine, or the spectacularly shot car chase followed by a bike chase, they keep you engrossed. Wish there was more to offer on the storyline for it all seemed too predictable. The screenplay too could have been crisp.

Tom Cruise is stupendous as Ethan Hunt, as expected. Is he really 53? And does he really do the stunts himself? He is the only reason the franchise is alive for so long, he doesn’t disappoint at all. Rebecca Ferguson puts up a commendable act as Ilsa Faust, while Jeremy Renner and Simon Pegg are at their usual best. Pegg tickles your ribs with his witty performance once in a while. Sean Harris is alright as the antagonist.

Music and background score by Joe Kraemer is alright; I wish there was more usage of the original MI theme. Editing by Eddie Hamilton could have been better. Cinematography by Robert Elswit, who also worked on MI4, is brilliant.

Is it worth your time and money?: It’s got Tom Cruise, and amazing stunts. It’s probably the movie every action movie lover has been waiting for. So I don’t think I need to answer the question!

But if you still need an answer, I’d definitely say yes. It might not be an awesome film, but it still gives you bang for the buck!