Wanting to go to a no frill place, dropped into Nandini on a week day for dinner. Similar to Sandarshini or Swathi, the place is more of a tiffin center with an air-conditioned dine in. The restaurant is pretty neat and the ambiance is decent. The place was pretty much empty when we got in, but eventually got full as the night progressed.

Amma wanted to have South-Indian food, so she ordered a Masala Dosa for herself. Me and bro ordered a Nargisi Kofta with Stuffed Kulcha and Tandoori Roti. 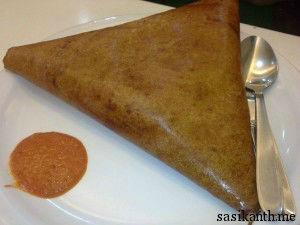 The Masala Dosa was served first, in about ten minutes, with the regular chutney, sambhar and Imli chutney. It was crispy and tasted good, but I thought the batter was a little sour. The sambhar was decent enough. 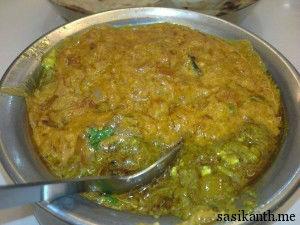 It took forever for the rest of the food. After repeated reminders, and more than 30 minutes, the Kofta, Roti and the Kulcha were finally served. I’ve had the Nargisi Kofta once here before, and this one looked very different from what I had the last time. It had two kinds of gravy’s with paneer kofta balls. It seemed like they were out of the gravy masala midway through, and tried to make up something to fill the dish. However, it tasted pretty alright. A little oily though. The Stuffed Kulcha was soft and very good. One of the best Kulcha’s I’ve had in recent times. The Roti was decent as well. 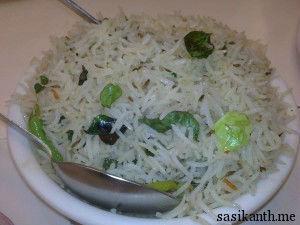 To finish it off, we ordered a Jeera Rice, making sure that it wouldn’t take long to be served. It came with biryani gravy and tasted fine.

Overall, a decent meal. The food was tasty and the quantity was on the good side. But for a low fare place, the prices were very high. The Roti was 20 bucks a piece while the Jeera Rice costed 90 bucks. The service too was not so great for it took an eternity for the food to be served. Give it a shot when possible, but don’t expect anything great.