I’ve been wanting to visit this place for about a month now, finally did with mom and dad. This branch they opened up a year ago, main Santosh Dhaba is at Abids, opposite Rajdhani Hotel. They do have another branch opposite Paradise in Secunderabad. They serve awesome vegetarian food, usually within minutes of placing the order. They have more than 50 varieties of North Indian curries on their menu.

We ordered Rani Kofta and Paneer Lababdar, along with Butter Naan, Roti and Stuffed Kulcha this night. I usually order their Special Dish (Kofta stuffed with Cashew nuts) which tastes really good, but wanted to try something different this time around. In less than 5 minutes, everything was served at our table. 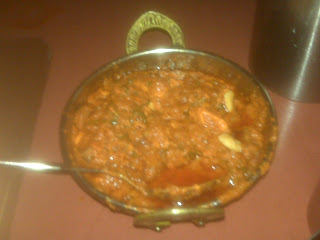 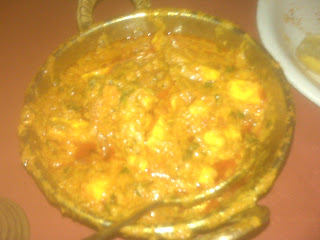 The Rani Kofta was a red spicy gravy, but to my surprise, there was not a Kofta piece. The Kofta was pretty mashed up. The gravy was full of onions, which made it taste really good. There were a couple of paneer pieces here and there. Paneer Lababdar was ‘laajawab’. It had huge chunks of paneer in it. There was not much gravy, but whatever was there tasted good. Yummy food, but my only complaint, too oily! 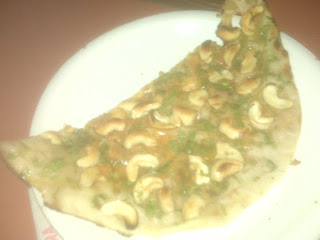 The Tandoori Roti was kadak, and was alright. It was pretty huge. Butter Naan was not so great, I’ve had better. But the Stuffed Kulcha was excellent. It was stuffed with cashew nuts and aloo, and was baked to perfection. Not too greasy either. It made my meal.

Overall, a good Indian meal for a decent price. They have so many more dishes I want to try out. I hope there is a day when I’ve tasted their whole menu. The ambiance of the restaurant (all three branches) is not so great. But the food balances it all. The ones at Paradise and Abids are little cheaper than this one.

If you are looking to dine at a good vegetarian dabha in Hyderabad, this is a place be at. Dont forget to hog on their Stuffed Kulcha.