Place: Thai Express
Location: Above Qmart, Road No. 3, Banjara Hills
Cuisine: Thai (and Chinese)
Meal: Dinner (with mom and dad)
After a really long time, here I was trying out a new restaurant. Wanted to try Thai Express, which was right next to my house for a really long time. Called in advance and made reservation for three, but when I walked in, the place was pretty empty. It had good ambiance, and the decors were pretty decent. We were promptly seated at a table for 6.

Though the place was empty, it took a while for the waiter to attend to us. We ordered the Tom Kha soup and Golden Money Rolls for starters. I wanted to have Basil fried rice really bad, for I loved the one they served at Thai restaurants in the US. They had Basil curry served with white Rice, but no Basil Fried Rice. So instead went for their special (recommended) Tom Yum Fried Rice, along with Veg Drunken Fire Noodles. I wanted to order another vegetable dish, and when I asked the waiter, he suggested Phat Thai Vegetables with gravy. 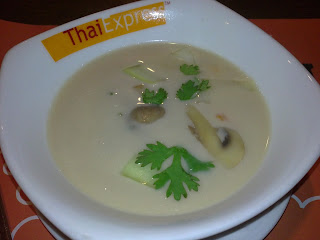 It kinda took forever for the soup to be served, and further long for the rolls. The soup looked yummy, but it wasn’t as good as it looked. It was very thin, and was made of watery coconut milk. The vegetables, were a little raw as well. Flavor was alright, but overall, disappointment. 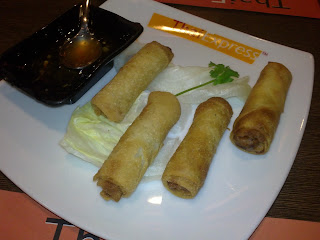 The rolls, thankfully were awesome. Crispy, perfectly baked, and the stuffing was spicy and tasty. The sweet chilli sauce (mix of duck sauce and chilli sauce) was yummy. 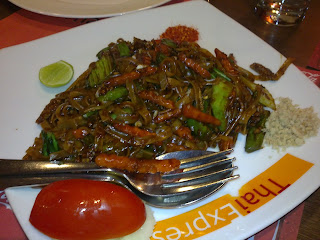 After a long long long wait, rest of the food was served. The food was presented very well, and I really was hoping that it would be as good as the rolls if not the soup. The Drunken Fire Noodles with Vegetables was excellent, and was the best of the lot. It was spicy, and perfect. There was a slight lemon touch, which made it taste delicious. I wish he’d given more of the crushed peanuts. 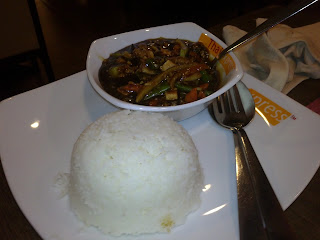 The Phat Thai Vegetables was served with white rice. Though the curry tasted alright, the rice was of bad quality, and a little over cooked. For a recommended dish, I honestly expected something better than this. 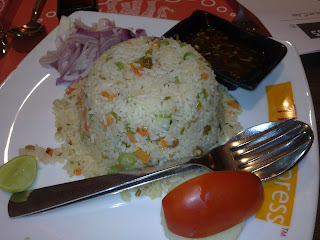 The worst of the lot though was the Thai Express Special Tom Yum Fried Rice! It was fiery spicy, and had no flavor to it. I asked the guy to modify it by adding a little salt, but that made no difference. He infact made it more spicy. Again, the quality of the rice was bad. Pathetic!!
Overall, a big disappointment. Except for the Golden Money Rolls and Drunken Fire Noodles, the rest of the food was bad, if not pathetic. The quantity of the Noodles and the curry was good, but the amount of rice was really less. For such exorbitant prices, I’d expect better quantity. Added to that was the horrible service. I had to keep asking the waiter to fill my water glass every time it got empty. The best part was when I asked him to fill my glass, he did, but didn’t bother to fill either dad’s nor mom’s glasses which were both empty as well!!
I am definitely not going back to this place for a really really long time. Visit at your own risk, but if you do, do try their rolls and noodles.
Food: 6.5/10
Ambiance: 9/10
Service:4/10
Meal for 3: Rs. 1080/-
Verdict: 5/10
Spread the love