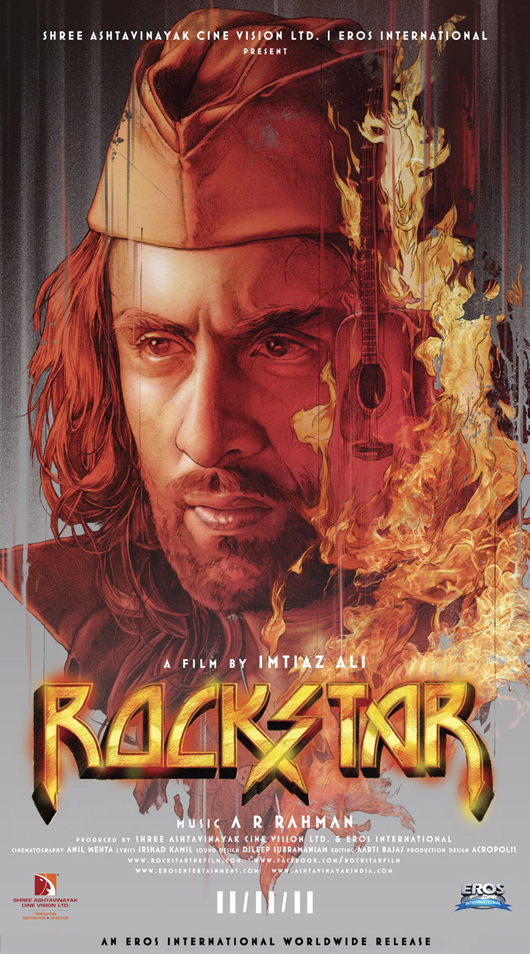 Plot
Rockstar Janardhan Jakhar/JJ/Jordan (Ranbir Kapoor), a middle class Haryanvi guy is a wannabe Jim Morrison. His college canteen owner, Khatana bhai (Kumud Mishra) philosophizes that a person needs a heart break to create awesome music. Going by this, JJ tries to woo the heart-breaking chick of the college, Heer (Nargis Fakhri). After a series of comic episodes, they become very good friends, and JJ helps organize Heer’s wedding. The rest of the story is about how JJ and Heer realize their love for each other, and how the heartbreak makes JJ a Rockstar!

Artists Performance
Ranbir Kapoor is fantabulous in the lead role. Its clearly visible that he had put in a lot of effort into this character. He has about five different get ups in the movie, and he carried all of them with ease. The only problem was his characterization (Il get into that later). Nargis Fakhri is a good find and looks really beautiful (though I thought that she looked very very lean). On acting front, she ain’t that great. It looked like she tried to imitate a number of actresses through the film. She’s definitely got talent which can be probably be put to use in better films. Shammi Kapoor has a very small role, and was good. Kumud Mishra is excellent as JJ’s manager. Aditi Rao Hydari was good as the journalist, who later becomes JJ’s ***. The rest of the cast was relatively new, and alright.

Story-Screenplay-Direction
Boy oh boy, where do I even start?? After roaring success of Jab We Met and Love Aaj Kal, director Imtiaz Ali seems to have lost his head. With Rahman to support him on music front, all he could churn out was a pathetic story; a married woman suffering from cancer, who cant even stand on her feet, sleeps with the lead actor, gets pregnant, and then slips into coma. And this forms the core story around which our loser becomes a Rockstar. Seriously dude, WTH?? I don’t even want to get into rest of the details. The first five minutes of the film had brilliant screenplay and so I was hoping for one hell of a film. Even the first half of the film actually turned out to be good. But post interval, everything went down the drain. The guy sitting in the next seat kept repeatedly asking his friend “Why is he doing this???”. We all need an answer Imtiaz!.

Being titled Rockstar, there is nothing rocking about the script. All the characters were very badly scripted, worst being Jordan. This guy seriously doesn’t know what he wants. He initially cant even pronounce Prague properly, but then becomes perfect at everything. He is supposed to be in love with Heer, but is more than happy to kiss and play around with other girls. There was absolutely no conflict point in the movie for Jordan to actually go through pain, cos Heer is more than willing to sleep with him (forget constantly kissing him backstage, while her husband is sitting in the front row). The most disappointing part was the lead up to ‘Sadda Haq’.

Imtiaz was able to get awesome performance from Ranbir, and even from Nargis in parts, but with such a weak, draggy script, Rockstar/Imtiaz disappoints!!

Other Departments
The pre Slumdog Millionaire Rahman is back, and he absolutely mesmerizes us with his music (though it aint exactly Rock music). The background score is very good as well. I loved the way he mixed the tracks for the bg. I was disappointed on the fact that my favorite song ‘Sheher Main’ was missing in the film. Lyrics by Irshad Kamil are a lil too complicated to figure put, but good. Cinematography by Anil Mehta is excellent, but most of the shots in Himachal looked similar to the ones in Jab We Met. Editing by Aarti Bajaj is pathetic. The story itself was such a drag, and on top of it, there are like ‘n’ number of scenes which could have made the cut but dint. Production values by Eros and Ashtavinayak are excellent.

Analysis
I’ve been waiting for this film for a long time now, and was really hoping that it would do well. But alas, it competes with Ra.One on the level of stupidity (actually, ignore that, nothing can ever be compared to Ra.One). As mentioned, the first of the film is pretty decent and promises a good film, but the interval bang and post interval episodes are pathetic. I really couldn’t understand why Heer would sleep with Jordan in the first place, and then scream her lungs out after everything was done. And this leads to ‘Sadda Haq’ (listen to it lyrics, then you’ll  probably understand why I keep saying that). The audience started clapping when Heer slips into a coma, which proves how good the movie was. And later when she steps onto the stage for ‘Tum Ho’, followed by the end credits, I could hear at least ten people scream ‘What the …’.

So that basically sums up my Rockstar experience. I got out of the theatre with a nice head ache. Except for the music, this film doesn’t even deserve a one time watch.

PS: Go get a DVD of a Telugu movie ‘Prema’ which runs on a pretty similar but much better story line instead of watching this!!