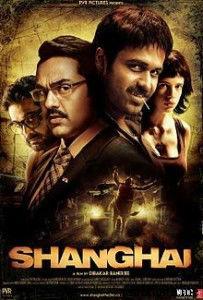 After creating quite a buzz with its trailer, Shanghai finally hit screens today. Coming from the talented director Dibakar Banerjee, Shanghai delivers, but not to everyone’s satisfaction.

Adapted from the 1967 political novel Z by Vassilis Vassilikos, Shanghai is a political thriller which aims to put forward the dark side of Indian, or in general, politics. Dibakar Banerjee sticks to the original thread, adapting the political scenarios to the suit the current Indian situation. His presentation is perfect, but it’s the very predictable script which hinders the film from making you sit on the edge of your seat. Added to this, the film is tediously slow, and at times borders on being an art film. Nevertheless, Banerjee is able to create an intense thriller, which depicts the depressing reality of today politics, while creating some wry humor. The characters are very well sketched and he was able to extract the best out of every actor. The slow pace of the film has to do with the screenplay (Urmi Juvekar and Dibakar Banerjee), but to be honest, I can’t think of it being any better. It is its strength as much as its weakness.

On acting front, Abhay Deol excels as the smart IAS officer caught between the dirty politics and his conscience. His performance in the climax was just perfect. If only he could have worked a little more on his Tamilian accent. Kalki Koechlin comes up with a very aggressive performance. She is a perfect fit for the role. Prosenjit Chatterjee is very good in his brief role as the social activist. After Shor In The City, Pitobash Tripathy shines again. This chap is full of raw energy. But the clear winner on the acting front is definitely Emraan Hashmi. Shedding the image of the serial kisser, he digs into his role with all his might and comes up with a brilliant performance.

On the technical front, music by Vishal-Shekhar is pretty decent. “Bharat Mata Ki” makes an impact. I thought the way “Imported Kamariya” song was inserted between shots was very effective. Background score is never too loud and just perfect. Editing by Namrata Rao is neat. Cinematography by Nikos Andritsakis is very very good. PVR Cinemas should be appreciated for investing in such kind of different film.

Overall, Shanghai is one of the finest films made this year. Dibakar Banerjee’s drama less way of story telling and some brilliant performances by its cast act as the positives. On the other hand, the slow pace of the film, and its serious monotone might not help it sink in with all kinds of audience. Though I thought it was slow, I liked it. You might too 🙂

Acting: 9/10
Story-Screenplay-Direction: 7.5/10
Technical Aspects: 8/10
Is it worth your time and money??: Shanghai is a very well made film, bordering on artistic genre. Its problem is the pace and a very predictable script, but some fine performances by all the artists makes it watchable. It’s a one time watch, provided you like such kind of dark movies.