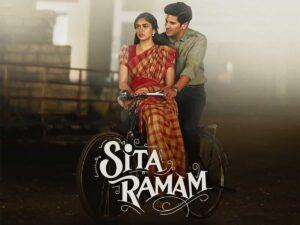 From the trailers, Sita Ramam seemed like a romantic love story from the 1960s, with a war backdrop. Does this age-old romance work in the current era?

Scripted and directed by Hanu Raghavapudi, Sita Ramam narrates the non-linear back-and-forth story of Afreen (Rashmika), a Pakistani student from 1985 who reluctantly travels to India to handover a letter written 20 years ago by Lieutenant Ram (Dulquer) to a woman named Sita (Mrunal). While trying to locate Sita, she learns about Ram, his heroics in the Indian army, his undying love for Sita, and a little about how she’s connected to them.

From the first frame, it is clearly evident that Hanu wanted to create a love story like Roja, a Mani Ratnam classic. While combining war and the army into love stories is not new, I thought Hanu tried too hard to make everything fit into the storyline. He succeeds with the love story element; an army officer receiving letters from strangers claiming to be his family when he says he’s an orphan is well conceptualized, and how this ignites Ram and Sita’s love story is beautifully handled. The twists and turns along their journey and how it’s integrated into the army operations work well until a point, but eventually starts to feel artificial and unrealistic, primarily because of the slow pace of the film. Movies like these need to have a crisp screenplay and keep you engrossed all through, and that’s where this movie falters.

Dulquer Salmaan is brilliant as Ram. His characterization makes you fall in love with him. Mrunal Thakur scores big on her Telugu debut; she looks lovely and utilizes her expressive eyes effectively. Sumanth has a meaty role and does justice. Rashmika’s act could have been better; it felt like she did the film just for the heck of it. There are numerous actors from across industries in the film but almost all of them either have a single frame or are under-utilized.

Music by Vishal Chandrasekhar is alright but nothing great. Editing by Kotagiri Venkateswara Rao is decent considering the slow screenplay; at almost 2 hours 45 minutes, the film is too long, but I doubt he could have done anything about it. Cinematography by P. S. Vinod and Shreyaas Krishna is a major asset to the film. The Kashmir valley is stunningly picturized, and so are the buildings and frames of the 1960s. Production by Vyjayanthi is commendable.

Is it worth your time and money?: Sita Ramam is a beautiful love story with its moments, but it falters because of its slow paced screenplay. So, watch it if you have the time and patience.

Worth mention: The chemistry between the lead pair.