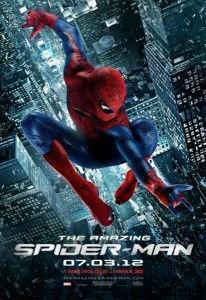 The Amazing Spider-Man is an entertaining film, but I liked the original, Sam Raimi’s Spider-Man better. This one has better visuals and 3D effects, but the script was too weak for it to surpass my expectations.

You know the story by now. Peter Parker gets bitten by a spider, his uncle gets killed, he gets onto the streets to avenge his uncle’s death while someone from Oscorp tests a drug on them-self to become a monster, and our Spider-Man now fights for a bigger cause, and eventually defeats the monster. Yayy!! Scripted by James Vanderbilt, The Amazing Spider-Man uses the same story line with quite a few tweaks. These tweaks are fine to an extent, but seemed forced on most ocassions. The characterization of the new Spider-Man is very weak, for he has these mood swings so bloody often. His relation with Aunt May is also not very well established. Though direction by Marc Webb is alright, screenplay by Vanderbilt, Alvin Sargent and Steve Kloveswas is very shabby. A crisp screenplay could have made such a difference to the film.

On the acting front, Andrew Garfield is pretty good as the new Spider-Man, but I liked Tobey Maguire better. Maguire had innocence and curiosity associated with his character, while Garfield looked more like a boy with a new toy. Emma Stone was alright as the love interest of Peter. Again, I liked Kirsten Dunst better. The rest of the cast was pretty decent. For some reason, I thought Irffan Khan had a weird accent.

The film’s visuals are brilliant and the 3D effects are very good. Cinematography by John Schwartzman is good, and editing by Alan Edward and Bell Pietro Scalia is decent. Music by James Horner could have been better though.

Overall, the film gives you the thrills, thanks to the visual effects, but a better story line could have made it a worth watch. The shady screenplay doesn’t make things better either. Watch it without expectations, and without comparing it to the original Spider-Man.

“Spider-Man, Spider-Man, Does whatever a spider can: Spins a web, any size..” Oops, I can’t without my artificial web maker!! 😛

Acting: 8.5/10
Story-Screenplay-Direction: 7/10
Technical Aspects: 8/10
Is it worth your time and money??: For the visuals and the 3D effects, yes!! Nothing so special otherwise.