Wanting to try out the new place next to her office, my friend invited me for lunch at All Seasons. She called and reserved a table for 3, so though it was packed when we walked in, we didn’t have to wait. The restaurant was brightly lit and had the buffet spread on one side. We were given a table in one corner of the place, which looked cozy and comfy, but was very uncomfortable once we sat down. There were fluffy cushions placed against a wall, which felt awkward. Also, the table was too small, so when I pulled it closer, it was inconvenient for my friend on the other side.

The soup and starters were not served on the table, so we helped ourselves. There was one veg and one non-veg soup, a couple of veg and non-veg starters. 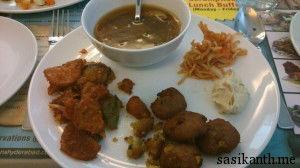 The Veg Manchow soup was alright. It was thick and had a decent flavor. Of the starters, the Crispy Vegetables were good, but the Corn Tikkis were horrible. They were dripping oil and were very hard. My friend neither liked the non-veg soup nor the starters. The Chicken was apparently very hard. So more or less, the soup and starters were a disappointment. But the best part of the meal was yet to come.

For the main course, they had Gobi Masala and Mixed Vegetable and two non-veg curries, Veg Noodles with Vegetables in Hot Garlic sauce, Veg Biryani and Mutton Biryani. They also had Dal and White Rice. 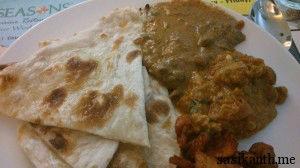 It was a real surprise that there was no Paneer curry on the spread. In fact, there was no Paneer dish on the entire buffet. Wonder what the chef was thinking. When it came to the veg curries, both were horrendous. The Mixed Vegetable was at least edible, but the Gobi was horrible. It had huge chunks of raw Gobi, and the masala had a strong cinnamon flavor. I was told that the non-veg curries weren’t anything better. The Naan and the bread were served on the buffet as well, in a casserole which was empty on most occasions. I luckily got the last piece of Butter Naan, which was alright. 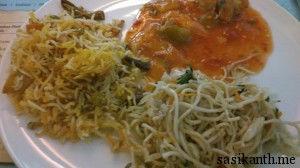 Thankfully, the Noodles and the Hot Garlic sauce were decent. Nothing great, but much better compared to the other food around. The Biryani again was pathetic. It was dried up rice with a few vegetables seasoned with tons of oil. Inedible!! 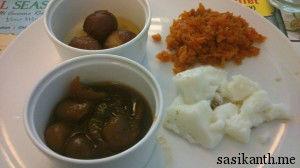 After a disastrous meal, we were hoping the deserts to fill our tummies. Luckily, except for the Gulab Jamoon which was very hard, the rest were good. The Kurbani Ka Meetha was fresh, Gajar Ka Halwa decent, and the fourth desert, which I believe was some kind of souffle, was the best of the lot. There were fresh-cut Watermelon pieces as well. 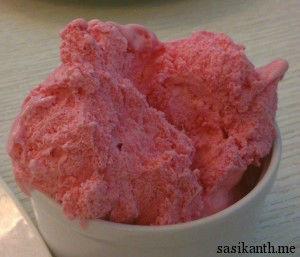 The best part of the entire buffet was the regular Strawberry Ice-cream (which I normally don’t like). After surviving their buffet, this seemed like heaven. Thank god that it was out of the box, for otherwise they probably would have ruined it as well.

Overall, an awful meal. To add to the terrible food, the service was atrocious. The salad plate on the buffet was empty so I asked the waiter for some onion. He said something which wasn’t audible. I asked him again and he did the same, this time more like a mumble. Wanting to hear what he had to say, I went next to him and asked again, and he irritably said go get it from the buffet. I was like LMAO!! The table wasn’t cleared after we were done with the plates either. We had a Snapdeal coupon and mentioned this right at the start of the meal. In spite of this, this is how our bill was presented. 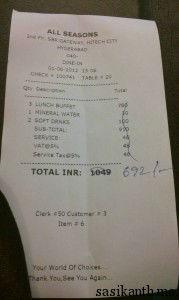 Wow!! To beat this, there was a large group sitting at the next table, who ordered from the a-la-carte menu. Almost 20 minutes after they place the order, the waiter came and informed them that their kitchen is closed, and they are not serving a-la-carte. They were then asked to go for the buffet. One of them asked if she could at least get a Curd Rice, and he informed her that they would charge her for the buffet and again for the Curd Rice. It was hilarious to see all this happen.

Though the purpose of the meal wasn’t met, thanks to all these moments, we ended up having a good time. We royally cursed our friend for making us a part of this disastrous meal. Unless you wanna take revenge on someone you don’t like, stay away from this place!!