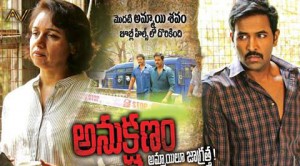 Ram Gopal Varma is one of the finest directors in Telugu industry. Unfortunately, thanks to his obsessive disorders, he ends up making some pathetic movies (like he’s been doing in the recent times). But if he puts his best foot forward, he definitely impresses one and all.

Anukshanam is a Psycho kinda dark film, where in a psycho killer is on a rampage in Hyderabad. There’s not much to showcase here but for the killings and the investigation; that’s where a director’s talent actually comes across, and RGV does a fabulous job. The 90 off minute movie is very gripping, and for a change (in Telugu industry), is more or less logical. The screenplay is crisp, and RGV gets the best out of all his actors. The way he handles the box sequence shows his calibre as a director.

Vishnu looked really dashing as the police officer investigating the murders. This is probably one of the best looks he’s had in all his movies. Revathi comes up with mature performance sans make up. Surya, the guy who plays the psycho killer is really good. RGV was able to bring out right emotions and expressions from him. Madhu Shalini was loud at times. The rest of the cast is alright.

Music and sound effects are the most important aspects for a film of this genre (apart from screenplay and direction of course), and they don’t disappoint. Editing by Kamal and Santosh is perfect, and cinematography by Nani is excellent. The visual look really good.

Is it worth your time and money??: If you like dark films, then Anukshanam isn’t gonna disappoint you. One might argue that there are better foreign films in this genre, and I agree. But this is definitely a good start for us. Lemme reiterate, it’s not a great film, but a good one nevertheless. RGV finally stands up!

Worth mention: The box opening sequence.