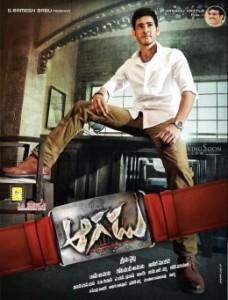 Srinu Vaitla has been on a roll in the recent past. His combination with Mahesh has proved successful, and the expectations on this film are very high. In order to meet them, all he does is a pot-pourri of two successful films. The first half is entertaining with a lot of resemblance to Gabbar Singh. Right from the title track to the game show episode, it all seemed a repeat with a new flare, thanks to Mahesh. Come second half, the pace reduces and we have another version of Dookudu. Srinu did try to make it interesting by making the villain dig his own grave, but it seemed too contrived. Dialogues are good, screenplay is neat, and direction is alright; if only the movie had original script.

It’s a cake walk for Mahesh for most of the movie. The only point where it gets difficult is when he steps into Pawan’s shoes. Thanks to his own style of acting, he does a commendable job, but one cannot stop compare these fine actors. On looks front, he’s shed weight and looks really dashing. His dance moves are worth mention. Tamannaah has limited screen presence, and does a good job. Bramhanadam entertains with his style of comedy (becoming the bakra), while the rest of the cast is alright. For Sonu Sood, it’s just an extension of his character from Dookudu. Shruthi Haasan sizzles in the item song.

Music by Thaman is more or less mediocre (but for ‘Saroja’), and the background score was no better. It’s time this guy took a break from movies rather than repeating the same old tunes over and over. Editing by Varma is decent, and cinematography by Guhan is excellent. However, there’s too much CG work, and that kinda spoils his work.

Is it worth your time and money??: You’ve seen it all in the past, so it all gets down to perspective now. I walked in with no expectations and walked out entertained, so I suggest you do the same as well if you’re planning to give this a watch. In one line, Aagadu is definitely an entertainer, but to what extent it entertains depends on your expectations; and patience 🙂

Worth mention: It’s all Mahesh. Other entertaining episodes are the game show and Bramhandam (CG) dance in the climax.

PS: It’d be nice if Telugu industry realizes the difference between Eunuch and homosexual (gay).

One thought on “Aagadu | Movie Review”