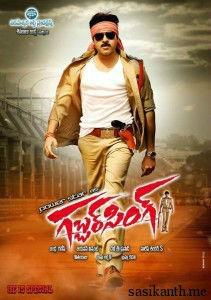 After more than a decade, Pawan Kalyan is back!! After delivering one dud after another post Khushi, this is one film you can watch only for PK. I watched it in a single screen, and the effect was mind-blowing. This movie is a treat for PK fans!!

Director Harish Shankar is a guy with talent. I remember watching Shock on the first day. Though it’s on my list of the worst films I’ve watched, his approach to the film was commendable. And now, for his third film, he does what no other director in the recent past could do – he extracts the best out of Pawan Kalyan. Though the film is a remake, firstly, he made sure to change it to suit the Telugu nativity and the hype surrounding PK. He made sure to highlight PK in every single frame of the film, and his characterization is perfect. He also inserted some amazing entertaining moments into the script. The Antakshari episode and Bramhanadam cut out episodes are few the best moments of the film. On the down side, concentrating only on PK made the film lose its pace mid way through. Few minutes before the interval, the interval bang, and the climax are a bore. The screenplay (Ramesh Reddy, Vegesna Satish and Harish Shankar) is a tad bit slow, and ineffective at times. But otherwise, the direction is pretty neat.

There is nothing much to say about PK, but that he is awesome. His antics are pretty good, and he gets into the skin of the character. Enough said. Shruthi Haasan is horrendous as his lady-love though. She is so bloody thin, that it looked as if a piece of cloth was wrapped around a stick. And she can’t act for nuts. Abhimanyu Singh was alright as the antagonist, but no where close to Sonu Sood in the Hindi version. Ali and Bramhanandam are good, but you expect much more from them. Suhasini, Kota, Nagineedu, Ajay are all alright.

On the technical front, music by Devi Sri Prasad is pretty average. Except for a couple of songs, there is nothing new the album has to offer. I thought the background score could have been much better. The dialogues, written by Harish Shankar, are very very good. Cinematography by Jayanan Vincent is decent, nothing great. Editing by Gowtam Raju is way better than his last venture Racha, but still could have been crisp. The film seemed too long, and few scenes could have made the cut. Production values by Parameswara Art Productions are very good.

Overall, a decent film. If Salman Khan made Dabangg the third highest–grossing Bollywood film of all time, thanks to PK, Gabbar Singh has the potential to be the highest-grossing Tollywood film. Its boring at times, and makes you yawn. Nevertheless, its few amazing moments and what fans term as Pawanism make this film work.

Acting: 7.5/10
Story-Screenplay-Direction: 7/10
Technical Aspects: 7/10
Is it worth your time and money??: After a couple of disasters, a decent Telugu film. Give it a shot!! It’s way better than any of the other crap playing in town!! 🙂