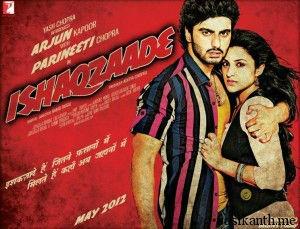 Ishaqzaade is an example of how a film without a proper script can get ruined. Its got some amazing chemistry between the lead pair, but like many other films these days, doesn’t have the script power to give them the boost.

Director Habib Faisal (writer and director – Do Dooni Chaar, screenplay and dialogue – Band Baaja Baaraat) had a promising story line at hand, but unfortunately, he doesn’t convert it into a promising script. Ishaqzaade, though predictable, starts of really well. Kids of  the rival Hindu and Muslim families, fighting initially but slowly falling in love. This half of the story (the first half) is very good, pacy, and has some amazing moments. The chemistry between Arjun and Parineeti is perfect, and you have an ideal interval bang. And then starts the trouble cos the latter half goes haywire, and Faisal loses it all. So you have a pretty much boring second half which ends with one of the most ridiculous and clichéd climax ever. Nevertheless, the film is entertaining and every character, though mostly clichéd again,  is very well sketched. The dialogues are very well written, and the screenplay is pretty neat. Only if he had come up with a better script, he would have had a definite winner at hand.

On the acting front, Parineeti steals the show. She has a very meaty role and she takes full advantage of it. She is a total firebrand and looks absolutely b-e-a-utiful (I have a new favorite actress). She breathes life even into a dying script. Arjun Kapoor makes a very good debut. He looks very raw, but to his advantage, the character needed that rawness. He still has a long way to go though. The rest of the relatively new cast is pretty good.

On the technical front, music by Amit Trivedi is very good. I am love with the title track and ‘Pareshan’. The background score could have had a little more punch to it. Cinematography by Hemant Chaturvedi is fantastic. Editing by Aarti Bajaj is good. The film barely crosses the two-hour mark. Production values by Yash Raj are, as usual, good.

Overall, an entertaining film. Plus points are good performances and Parineeti. A dull second half and the cliched climax form the other extreme. It’s not a movie you need to run to the theater for, unless you wanna watch the gorgeous/pretty/beautiful Parineeti scorch the screen.

Acting: 8.5/10
Story-Screenplay-Direction: 5/10
Technical Aspects: 8/10
Is it worth your time and money??: Hmm… That’s a tough one. I guess yes, for its got some awesome performances by Parineeti, and even Arjun. Give it a shot at your leisure.