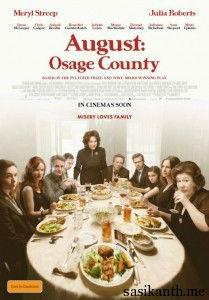 With a brilliant, star-studded cast, I was expecting quite a bit from August: Osage County. Though I was a little perturbed by the end, I wasn’t disappointed.

Based on the award-winning play by Tracie Letts (playwriter and screenplay), August: Osage County is a drama about dysfunctional family trying to find solace by abusing and shattering each other. Honestly, the movie is quite disturbing, for it depicts each member of the family tearing apart the other irrespective of their relations. It’s a movie portraying how ugly things could be if you aren’t up to face your demons within the walls of your home. Meryl Streep and Julia Roberts play out of their skins to bring life to this drama., while Sherlock’s Benedict Cumberback comes up with another fine performance. The rest of the cast is equally brilliant. Direction by John Wells is neat, while the screenplay by Letts is pacy.

Is it worth your time and money??: While it features some spectacular performances, August: Osage County is not a film for everyone. As mentioned, it is very disturbing and makes you think how lucky one is for not having such a screwed up family. Watch it at your own discretion.