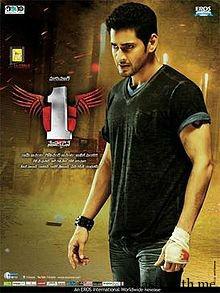 Though I’ve watched some really good movies in the recent past (American Hustle and Wolf of Wall Street to name a couple), I haven’t felt inclined to write a review, mostly because enough has already been said about these movies. But after watching 1: Nenokkadine, I feel compelled to write one.

Having read some mixed reviews about the movie, I was eagerly waiting to watch it to judge it myself. It finally released in Singapore a week later after it did in India, and spending as much as I would for an IMAX movie ($20), here I was in a packed auditorium on a Sunday evening.

Scripted and directed by Sukumar, 1: Nenokkadine is a sigh of relief from the regular commercial Telugu movies coming out lately (where Brahmanandam gets slapped for no reason). The unique concept was very well conceived by Sukumar, and Mahesh Babu did a tremendous job to pull it off. The first half of the movie is really gripping (especially the first fight, and few of the Goa episodes). However, the lack of effective screenplay pulls down the movie in the second half. Though the direction is neat, the screenplay which is great in parts, could have been way better. The length (close to 3 hours) also doesn’t help viewers sustain interest for this genre. Nevertheless, the twists were good, and Sukumar did a good job to explain most without leaving any loose end (But for the hero getting away with multiple murders in a foreign land).

On the acting front, it’s more or less a cakewalk for Mahesh. He looked great, and was amazingly good in the imaginative episodes. His dances definitely need a mention. It was good to see the heroine get a full length role. Newcomer Kriti Sanon looked gorgeous and did a decent job. Posani was a little irritating with his fake Punjabi accent and “Dudu”. The rest of the cast was alright.

Music by DSP is more or less mediocre, but the background score is pretty good (and haunting). Cinematography by Rathnavelu is of top-notch quality. However, just like the screenplay, editing work by Karthika Srinivas is another negative. As already mentioned, films of such genre need to be short and crisp, and this is where 1: Nenokkadine loses out.

Is it worth your time and money??: As you must have already read, this is not a film for everyone. It’s a thriller with pretty good twists and turns, and some great acting from Mahesh. On the flip side, the ineffective screenplay and the run time make the film lose steam. Nevertheless, 1: Nenokkadine is a good watch. If you appreciate different genres, I’d suggest you watch this one.