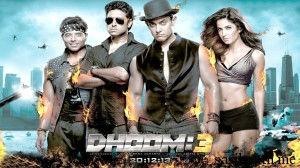 Abhishek proves with this film that he is no better than Uday Chopra (seriously). He has the same pathetic expression throughout the movie. Uday on the other hand, if not acting, made people laugh more than a couple of times at least (intentionally and unintentionally). Katrina sizzles, but barring the songs, has screen presence of less than 10 minutes. The entire bhoj therefore is on Aamir’s shoulders, and thankfully, he is the only saving grace of the film. But somewhere down the line, he seemed to have realized what he landed himself in to for he didn’t seem at his usual best. He reminded me of SRK on a couple of occasions while playing the “secret” role.

Is it worth your time and money??: Unless you like no brainer films, I’d say stay away. This holds true especially for Aamir Khan fans like me. On the other hand, if you wanna laugh your asses off watching some seriously funny and impossible action sequences apart from the super hot Katrina, go for it.