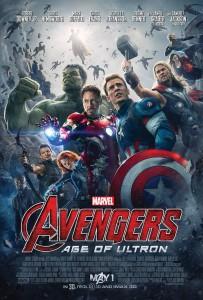 The Avengers was one of the best films to come out from Marvel Studios; it was close to epic in terms of super hero films. Avengers: Age of Ultron might not be as epic as the predecessor, but it’s still a good watch.

Joss Whedon kick starts the movie with our superheroes trying to retrieve Loki’s scepter from a fictitious European country. While they do the needful, they realize that Hydra experiments have created the twins – Quick Silver with superhuman speed, the Scarlet Witch with telekinetic powers. Scarlet hypnotizes Stark to see things, because of which he decides to create artificially intelligent Ultron defence program using the scepter’s gem. Things go wrong, as expected, and Ultron revolts against the Avengers; it’s time for some bang-bang! On script and direction front, Whedon does a good job; he brings out the best from all his leads and does justice to the ‘Hulkbuster’ episode. However, he loses steam on screenplay; there are multiple episodes with multiple threads, and all of these weren’t really well-connected. The climax also seemed to be hurried.

While the star/Stark had maximum footage in the first film, this one provides equal opportunity to all the leads. Robert Downey looked stoned at times, but still comes up with a good act; he’s good as long as he’s witty! Chris Evans and Mark Ruffalo are decent while Chris Hemsworth is great; his expressions when people are trying to lift Mjolnir, his hammer, are brilliant. Jeremy Renner has more screen-time than one would expect, and he’s good. Scarlett Johansson is hot, and Elizabeth Olsen is hotter. James Spader brings life to Ultron, but honestly, he’s no Loki/Tom Hiddleston. The rest of the cast is alright.

Music by Brian Tyler and Danny Elfman is decent, but we mostly hear the theme composed by Alan Silvestri on-screen. Cinematography by Ben Davis is perfect, while editing by Jeffrey Ford and Lisa Lassek is neat. 3D effects are good, but not breathtaking.

Is it worth your time and money??: While not as spectacular as its predecessor, Avengers: Age of Ultron is a good film. The action episodes are well canned, and you’re sure to enjoy Iron Man fighting Hulk. My suggestion: don’t expect too much, and you wouldn’t be disappointed!