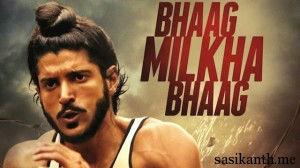 Is it worth your time and money??:
Oh yes, this ain’t a film to be missed. After a disastrous Delhi-6 four years ago, director Rakeysh Omprakash Mehra has a winner at his hand. Direction is perfect, and similar to Rang De Basanti, Rakeysh uses a non-linear narrative to unfold the story beautifully written by Prasoon Joshi. However, though the film starts off great and the first half is perfect, the film loses steam in the second half and feels like a drag thanks to slow screenplay.

On acting front, Farhan Akhtar, take a bow!! He seriously got into the skin of the character and did an awesome job as Milkha Singh. His performance, especially in the national record break race is brilliant. Forget director, Farhan is sure to win a best actor for his perfect portrayal. Pawan Malhotra and Yograj Singh were both brilliant in their respective roles, and Prakash Raj is good in his brief appearance. Divya Dutta does a commendable job as well. Sonam Kapoor has very limited screen presence (about 10 minutes), and was the only misfit. Rebecca Breeds is decent in her brief appearance.

Music by Shankar-Ehsaan-Loy adds life to Farhan’s performance. The title track and ‘Zinda’ are both brilliantly composed. Cinematography by Binod Pradhan is of top-notch quality while editing by P. S. Bharathi could have been way better. The film, at more than 3 hours in length, is too long to narrate the story effectively. A number of episodes seemed out-of-place and could have made the cut. Placement of songs also derailed the narrative on a couple of occasions.

Overall, ignoring its flaws, the film is still excellent. Farhan comes up with an unforgettable performance. Go learn more about the flying Sikh now!!