First off, let me make it very clear that I love McDonald’s, or at least used to until my visit to the store on S D Road. Wanting to have some fries and ice-cream, we decided to drop in at McD on a Sunday evening. I ordered for a medium McAloo Tikki meal, asking for Coke Float instead of the Coke, Peri-Peri mix, a McFlurry ice-cream and a portion of the Crispy Veggie Poppers. The bill came up to Rs. 195/-, and I paid using my credit card.

While I was waiting for my order to arrive, I started to calculate why the bill turned up to Rs.195/-. I checked the bill, and was charged as follows.

In a nutshell, I was charged Rs. 102/- for the medium McAloo Tikki meal, Rs. 13/- for the Peri Peri mix, Rs. 25/- for the Poppers, and Rs. 22/- for the McSwirl, which comes upto a total of Rs. 162/-. I was surprised to see that I was charged Rs. 33/- as taxes. I don’t remember McD ever charging taxes on their food, for they were always inclusive, but having stayed away from India for a while, I thought it must be some new regulation, and was actually fine with it.

Then I look up at the display menus behind the counter, and see their new double burgers. This is what I saw. 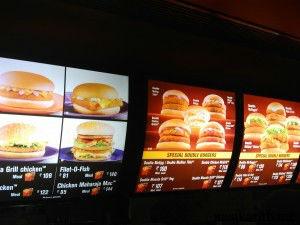 If you observe closely, you will find the price for the Double McAloo Tikki medium meal as Rs. 100/-. I was startled by this. Being charged Rs.102/- for a single burger when the double burger was priced at Rs. 100/-, I immediately asked the guy at the counter about the same, and he informed me that the 102/- was including the taxes, which wasn’t the case. When I demanded for a better answer, he called upon a bunch of guys, all of them arguing that Rs. 102/- was the right price. I wasn’t planning to budge and therefore stood my ground.

They took my bill in, discussed a bit, and a while later, a new guy calling himself the manager (though he didn’t look like one) walks up to me and says that they have a new menu and the prices haven’t been updated yet on the display menu. When I asked how that was possible, he didn’t have an answer. I demanded to know the price of the McAloo Tikki meal. They actually didn’t know the price, and were punching it into the machine to tell me how much it costs. This time around, they came up with an even better number of Rs. 126/-. I was shocked to see this attitude from one of the best service restaurants in the world.

The manager, Sai Kiran, asked me to take a seat and enjoy my meal while he sorted things out and got back to me. My cousins and myself walked up to the first floor to sit and eat. Ten minutes later, he walks up and says that there has been some error, and wanted my phone number and email so that they could get back to me later. When I demanded an answer right then, he went back again and came back after another ten minutes. He said that the menu which was displayed was the lunch menu, and therefore had different prices. The display menu didn’t mention anything about lunch, and so I asked him for better explanation. He requested that I come down with him which I did.

While all of this was happening, they showed me the display again and again and tried to argue that the Rs. 100/- displayed for the Double McAloo Tikki was the lunch menu, rolled it over to show a new dinner menu, where in there was no McAloo Tikki meal. Both the menus, before and after the roll, looked exactly the same, and none of them had any mention of Lunch menu on it. This argument went on for a while, where in the bunch of guys including the manager would agree on the mistake that there was no mention of lunch on either of them, but had no answer. They said the marketing guys were responsible for the prices and display menus.

Another customer who overheard my argument joined in and pointed out on how the prices for the same item were different before and after the roll over; The Double McVeggie meal was priced at Rs. 139/- (as seen in the picture) on one side, and at Rs. 131/- on the other (I wanted to click a picture, but the manager didn’t let me). The manager told the customer that the rollover was the lunch menu, satisfied him and sent him away. Something I realized however was that the menu which showed Rs. 139/- was the claimed lunch menu, with the Rs. 100/- Double McAloo Tikki (picture), while the other menu, the supposed dinner menu had the Double McVeggie priced at Rs. 131/-. So the dinner was actually cheaper than the lunch. In either case, there was an error. When I asked the manager about the same, he was clueless. When I asked him for the printed menu with prices, he refused to show it to me. The fact that the same item had two prices on their menu came as a real shocker.

Having just completed my Global MBA, and having done more than a couple of cases on the efficiency and high service standards of McDonald’s, I was absolutely stunned at what I was discovering. It looked like they had no fixed price for any item, and were charging whatever they seemed right, and we as customers were paying it without questioning. If it were just a one-off where in I was charged wrong and was refunded, I would have shut up and left. However, it doesn’t seem like a one-off thing but something they do very often. Being given the bill after the cash has been paid, on most occasions, we have no clue on how much we are being charged for each item, and taking this as an advantage, McD seems to be, for lack of a better word, looting its customers.

Having been a fan of McD for as long as I can remember, I nevertheless hope that this was an honest mistake and they rectify it. In the case that it isn’t, McDonald’s will no longer be the place I’d be visiting for a long time. If you plan to, I’d suggest that you double-check your bill, for you never know how much the original prices of the items are.

As of now though, I’m no longer lovin’ it!

Update: I got a call this morning from the manager Sai Kiran. He apparently spoke to the head office about the prices and this is what he had to say – “Normal McAloo Tikki meal is Rs. 102/- and the Double McAloo Tikki meal is Rs. 105/-“. A difference of 3 bucks for an extra patty. When I asked him how the display said Rs. 100/-, he said the prices were printed wrong on the menu 🙂

P.S.: I was told I would be getting a refund for they agreed there was an error, but was never offered one.