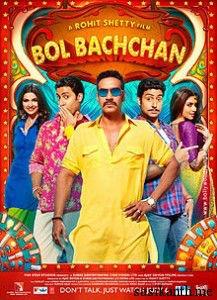 I had no intentions of watching Bol Bachchan, but was forced to do so as there was nothing better running in theaters. After two and half hours, I walked out with a bad headache.

Director Rohit Shetty’s Bol Bachchan, like his earlier films, is a run of the mill, senseless comedy. Even for such a senseless dumb film, the first half is pretty decent. But the second half is such a drag, that even the dumb comedy turns out to be repetitive and boring. For the  tagline don’t talk, just watch, add don’t think. Ajay Devgan is pretty decent in the lead role while Abhishek Bachchan proves it that he is suitable only for such kinda roles. I wonder why they even do such kinda films. The rest of the cast is either too loud or doesn’t even have a proper role.

Music by Himesh Reshmiya and Ajay-Atul is decent, while the cinematography by Dudley is pretty good. Editing by Steven Bernard could have been way better. Most of the scenes in the second half could have made the cut.

Overall, an utter waste of time. If you really want to watch a comedy film, grab a copy of the  original Golmaal instead of wasting your time on this crap.

Acting: 5/10
Story-Screenplay-Direction: 3/10
Technical Aspects: 6/10
Is it worth your time and money??: No. Unless you happen to like such boring comedies, or have time and money to space, skip this one please.