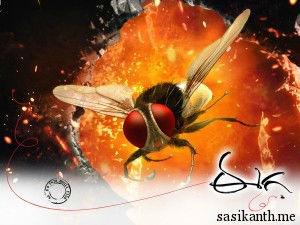 I lost interest in Eega once the movie’s release got postponed from March. It’s been a week since the movie released, but I had no urge to watch it and have been skeptical on its success. I finally did last night, and it was proved wrong. Kudos Mr. Rajamouli, for you have changed taken Telugu cinema to a different level altogether.

Eega starts off with a father narrating a bed-time story to his daughter. This gives the director, Rajamouli, the freedom to play along with the story of the movie, and fantasize it as much as possible. I thought this was brilliant concept, for  you know it’s a bed time story. However, Rajamouli tried to make the movie as realistic as possible. Except for the tantric episode, the rest of the story is flawless. The story is simple, and the execution is very neat. The love story is brilliantly shot, and an abrupt end caused to the romance makes you connect with the fly, feel his pain. The following revenge episode is perfect, and you cheer for the fly as if he’s your kith or kin. It is very difficult to be able to execute a story so perfectly such that it connects, but Rajamouli does it with ease. The screenplay could have been a little better, but I really got no complaints about it.

In Sudeep, Rajamouli he had a brilliant actor, who adds life to the film. The fly graphics could be good or bad, but the actor acting with the fly needs to set the tempo of the film, and Sudeep just does that. He is a versatile actor. Nani shines in his brief but important role. In 20 minutes, he had the responsibility of connecting with the audience, and he did. Samantha is alright as damsel in distress. She could have been a little more expressive at times though. There is not much of a cast otherwise.

Music by Keeravani is an asset to the film. The title track is used very effectively, and the back ground score is very good. It would have been nice if the entire “Nene Naanine” song were used. Cinematography by Senthil Kumar perfect.  and editing by K. V. Rao is neat. Except for Eega’s birth episode, the graphic work for the rest of the film is of top-notch quality. Production values are pretty decent.

Overall, an entertaining watch. It might not be a perfect film, but it seriously doesn’t matter for Rajamouli takes Telugu films to a different level. He is a director with guts, and proud to have him among us. It’s a much watch film for every Telugu film lover. Leave your inhibitions behind, and go watch it. Am sure you won’t be disappointed.

Couldn’t help but capture this on my way back home from the movie. Maybe he has a story too 😛 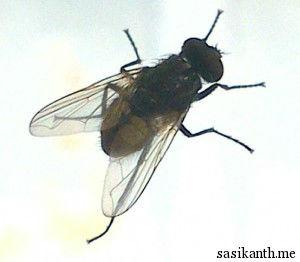