After wanting to visit this place for a long time, here I was finally on a weekday for dinner with couple of friends. The entrance is either through Nature Basket, or from the side of the building. Walking in, the place was brightly lit (a little too bright I suppose), and was partly full. They had a pastry counter at one corner and a glass kitchen on the other side. The ambience was just like any other Ohri’s restaurant in town, pretty good.

Once seated, we were handed over a couple of regular huge menus, and a tablet. The tablet was clunky and pathetic, and its response time was horrendous. Unable to suffer misery with it, I asked it to be replaced with a regular menu. For the European experience they’ve been advertising about, I didn’t find anything special on their menu. Probably except for the Chicken Piri Piri, the rest were the usual Pizzas, Burgers and Pastas. I wanted to try their Pizza, so ordered Cayenne Mushroom Pizza. My friend ordered a Harvest Vegetable Multi Grain Pizza, and the other asked for a Mushroom and Chicken Cannelloni. We also ordered a side of Potato Wedges, Coffee on the Rocks and Confuso Blast. 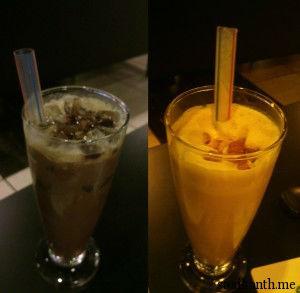 The drinks were served first in about 10 minutes. The Coffee on the Rocks was very good. It had a strong Mocha flavor. The Confuso Blast was supposed to be Frappe blended with honey and topped with nuts, but it was first served without any nuts. When I informed the same, it was taken back in and a couple of Pistachios were added on the top. It was a bad choice on my part, for it was just plain cold coffee, nothing impressive. 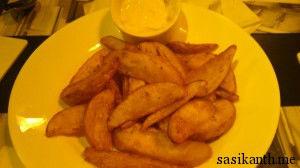 The Wedges were served soon with some mayonnaise. They were crisp, but too oily for my taste. 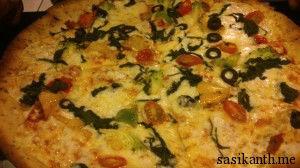 My friend had asked his Harvest Vegetable Pizza with as minimal cheese as possible, but the Chef seemed to have misunderstood it for extra cheese, for it was full of it. We were really unhappy with it and asked for a replacement, and it was replaced without any fuss. 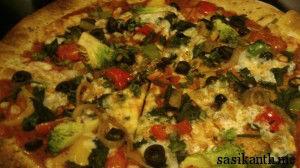 The replacement pizza looked much better, and there was a harvest of vegetables on it indeed – cherry tomatoes roasted with garlic, basil, peppers, spinach, broccoli and caramelized onions. The base was crisp, and nice. Nothing exotic, but a decent pizza nevertheless. 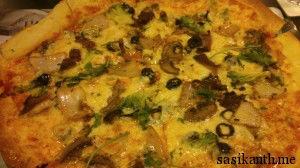 My Cayanne Mushroom Pizza was cheesy, just the way I wanted it to be. It had button mushrooms, morels, broccoli, roasted garlic, cilantro, onions, olives and mozzarella on a piri piri sauce base. There was not much piri piri, and therefore the pizza wasn’t as spicy as I expected it to be. The base too wasn’t as crisp as the Harvest Vegetable pizza. However, the cheese tasted yum, and overall, a good pizza. 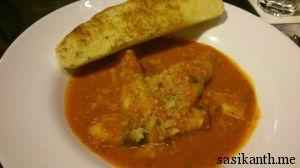 My other friends Mushroom and Chicken Cannelloni was served along with buttered Garlic bread.  The sauce was too thin, but the Cannelloni, apparently, was very good. The quantity served was very less though. 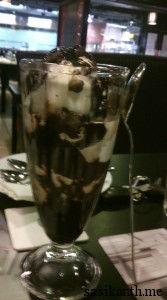 To finish off the meal, we ordered an Ebony Ivory Mousse and Awful Brownie sundae. The Awful Brownie had chunks of yummy brownie with vanilla ice cream topped with chocolate sauce. It tasted great. Warm brownie would have tasted even better. 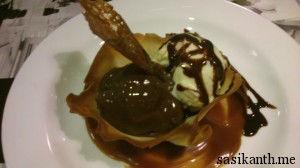 The mousse was a dish suggested by the waiter. It was supposed to be White and Dark Chocolate Mousse with Caramel sauce. I specifically asked him if it was going to be fresh mousse and he said yes. Instead, what they served was something which tasted more like gelato than mousse. It was very sweet and a total disappointment.

Overall, an average meal. The pizzas were good and the rest was decent. The service was pretty neat. We sat for a long time, and were never really bothered. The food is expensive, but that’s a given when you visit an Ohri’s restaurant. Ruci and Idoni is not a fancy restaurant like they make it sound, but a decent one nevertheless. Give it a shot at leisure.