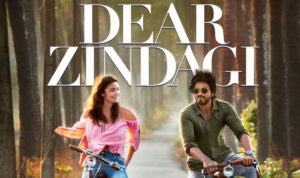 Four years after her directorial debut, Gauri Shinde is back with what looks like another feel good film. The trailers looked promising, but does Dear Zindagi live up to the expectations? Let’s find out!

Kaira, aka Koko, is a mid-twenties hipster who is struggling with almost everything in her zindagi. Her career as a cinematographer is in doldrums mainly because of her commitment issues with the director of her dream film, her land lord kicks her out from her apartment in Mumbai cos she’s a single girl, and she isn’t happy about moving to her home town Goa because of unresolved issues with her parents. They might not seem like a lot for a commoner, but Koko is burdened by these issues in her zindagi. She unwillingly moves to Goa where she bumps into a dimakh ka doctor (psychiatrist) Jahangir Khan. Though reluctant at first, she opens up to the doctor. With lines like “don’t let the past blackmail your present to ruin a beautiful future” he makes her realise how petty she’s being, and voila, becomes happy with her zindagi.

Gauri tries her best to keep the feeling up-beat but fails on more than one occasion. The first half is vibrant yet dramatic, for everyone on-screen is trying too hard to fit into their roles. The film eases a bit in the second half, but the uncannily long therapy sessions make you feel like you’re sitting in therapy. Her intention of making you feel like that there is always more to life starts to lose charm, and you start yawning (some folks, in fact, left the theatre). Barring these slips, screenplay and direction are alright.

Alia shines as the protagonist. She gives her best performance till date when she opens up in the latter half of the movie. Shah Rukh looks mature and fits the bill perfectly. Thankfully, unlike himself, he’s very subtle. Ira Dubey and Yashaswini Dayama are good as Koko’s friends. On the downside, her parents seemed artificial, primarily because of their pitiable characterisations.

Music by Amit Trivedi is peppy with “Love you Zindagi” making a mark. Background score, or the lack of it, should have been better dealt with. The silence during therapy sessions was traumatising. Cinematography by Laxman Utekar is neat while editor Hemanti Sarkar was too lenient with the final cut.

Is it worth your time and money?: Dear Zindagi barely makes the cut as a feel-good film. For some, it will sure seem like a lecture. Nevertheless, the performances by lead cast make it a onetime watch.

Worth mention: Alia’s performance in the second half.