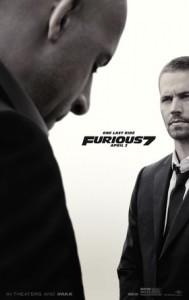 Fast & Furious 7 is touted to be the last ride. It probably wasn’t their intention when they started with the production, but circumstances have led Furious 7 to be the one last ride with Paul Walker.

James Wan, who’s directed horror movies like The Conjuring in the past, is in the driver seat for the last, ok, enough of it. There are tons of action episodes and chases, most of which are well canned; but the fast-paced action seemed to have a burden on someone who’s’ done horror his entire life. While you might at times feel a little nauseated, James still does a decent job on direction front. Planning the screenplay must have been a big challenge, because the untimely demise of one of the main characters; nevertheless, Chris Morgan does well.

Vin Diesel barely acts, but he gets the job done, like he’s done in the remaining five films. Paul’s footage is pulled off well by his doubles. Jason Statham is perfect as the antagonist, and gives the lead pair a good fight. Dwayne Johnson has minimal presence, and thank god for that 😛 . Michelle has a dead expression for most part (but why!). The rest of the cast, is just alright.

Music by Brian Tyler could have been better. The sound effects and mixing however, are excellent. So is the cinematography by Stephen Windon and Marc Spicer. While editing (by a bunch of guys) is decent, the film might seem a little too long for most.

Is it worth your time and money?: Forget logic, it’s all about action; it’s Fast & Furious. With well canned stunts, and a decent storyline, you have a good action film yes. And more than that, the montage towards the end will leave you teary. So, what more do you need?

Worth mention: Almost all the action stunts make you go whoa. And the montage!